Seattle, Washington, U.S.A.-based Alaskan Leader Seafood is differentiating its products from other cod in the United States marketplace with a new marketing campaign featuring its recently-approved trademark: “America’s Cod Company.”

The new slogan, which will be utilized on packages, in grocery stores, on the supplier’s fishing boats, and in other marketing, “encapsulates everything we are,” Alaskan Leader CEO Rob Wurm told SeafoodSource. The fresh and frozen seafood supplier, which was formed in 1990, is one of the largest longline cod fishing companies in the United States. Its Marine Stewardship Council-certified cod, black cod, and halibut are harvested via hook-and-line in the Bering Sea and is fully traceable from the fishing vessel to the consumer.

“With all these uncertainties about where our fish comes from, and who is partners with who, and with traceability, we want to make a statement that, if you are interested in those things and they are important to you, this is who we are,” Wurm said. “When you see that ‘America’s Cod Company’ label, it will tell you that you can be assured of a couple things: our fish and our story starts from integrity and transparency. Any product that you buy [from us] will have that consistent quality and integrity, and we are going to stand for that product…from the time it comes on the boat to the time, it goes on your plate at the dinner table.”

The supplier distributes its products, which include Lemon-Herb Butter Marinated Cod Portions and Cod Taco Packs, to retailers such as Costco, H.E.B., Whole Foods Market, and Publix. It also supplies foodservice distributors such as Sysco and restaurant chains such as Ivar’s.

Alaskan Leader is a major cod supplier to Purina, which uses the fish in its “Beyond” natural and sustainable pet food and treat line. Plus, it manufactures its own “Cod Crunchies” pet treats brand, along with private label cod pet treats.

The new slogan helps cement Alaskan Leader’s place in the U.S. marketplace in consumers’ minds, according to Singleton.

“We have competition from Norway, Russia, and elsewhere. We want to build something that gives us a strong foothold in the market as well. We want people to know that we are 100 percent American and that we are founded and built on cod,” Singleton said.

“People always ask us where our fish is from, and we continually tell them it is caught in Alaska, processed in Seattle, and distributed throughout the U.S.,” Singleton added.

While Alaskan Leader consistently hears concerns from consumers about imported seafood, the company’s intention is not to disparage fish from another country with its new trademark and logo.

“We weren’t thinking about everybody else,” Wurm said. “It is simply another piece of how to understand our company and what we are trying to offer the American public.”

Scott Sandvig, vice president of Alaskan Leader’s value-added division, said he believes the U.S.A. label can be a prime selling point for the company.

“It is not to take away from anybody’s else’s pride but what we have: the cod is 100 percent U.S.A.-harvested on U.S.A. boats by U.S. fishermen,” Sandvig said. “Any fish that goes to our customers or fish counters at the grocery store, we want to make sure they see it as a high-quality U.S. product. That phrase encapsulates our story.”

While Alaskan Leader executives are still discussing all the ways the company will use the new slogan in its marketing, “America’s Cod Company” will likely be used on its website and social media, on packages, and in stores.

For example, in grocery stores’ seafood departments, where Alaskan Leader supplies frozen cod that is refreshed, the supplier will provide picks to stick in the ice in front of the fish. The picks will likely include the logo and note that the product is “Bering Sea cod” and “a product of the U.S.A.”

A quick recipe, such as sautéing the cod in butter or oil and seasoning with salt and pepper, will be provided on the back of the pick.

“Any seafood manager or staff can look down at the back of the flag and see that it is longline cod and eco-friendly, and they can give a cooking suggestion to the customer standing in front of them,” Singleton said. 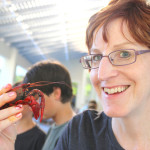