The largest center of manufacturing in the U.S. is about as far from the rust belt as you can get.

The Los Angeles metro area has the most manufacturing workers in the country. More people work in factories there than traditional blue-collar towns such as Chicago, Detroit or Philadelphia.

While the number of manufacturing workers in Los Angeles and nationwide has plummeted from 25 years ago,  the community has maintained its leadership position. 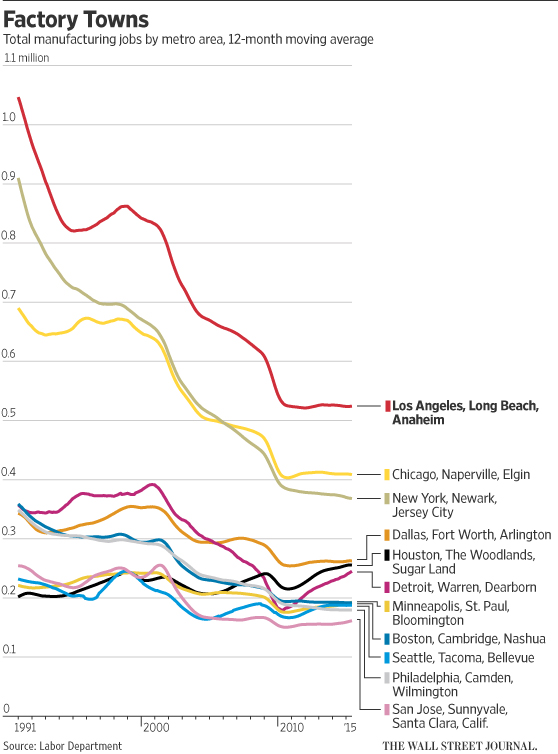 Some businesses worry that increasing the minimum wage in the city of Los Angeles to $15 an hour by 2020 could threaten Tinseltown’s place atop the manufacturing list.

That’s because more than one in eight manufacturing employees in Los Angeles County, which includes the city, work in the apparel industry. That sector pays much lower wages than other factory jobs. Apparel workers in Los Angeles County earned an average of $655 a week. The average weekly wage for all manufacturing workers nationwide is $830 a week.

Manufacturing employment in Los Angeles and several other areas has stabilized in recent years.

There have also been a few growth areas.

Manufacturing employment in Houston grew steadily over the past five years, reflecting a resurgence in domestic energy production. And factory jobs in Detroit have rebounded after a sharp drop-off during the recession. That coincides with stronger vehicle sales.