By: James Hagerty
After more than a decade of losing ground to China and other export powerhouses, U.S. manufacturers are finally showing signs of regaining their competitive edge.
The U.S. deficit on trade of manufactured goods in this year’s first half shrank to $225 billion from $227 billion a year earlier, according to data compiled by Ernest Preeg, an economist and trade expert at the Manufacturers Alliance for Productivity and Innovation, an industry-funded research group in Arlington, Va. The improvement, while slight, came after years of ballooning deficits as the U.S. lost manufacturing business to China, South Korea and other nations. 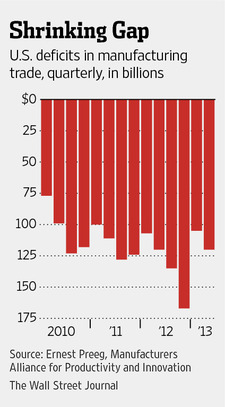 “It’s a hopeful sign,” said Mr. Preeg, who derives his tally of manufactured-goods trade from official U.S. data, leaving out other types of merchandise, such as grain or coal. “At least we’ve leveled off.”
His findings come as Boston Consulting Group—a leading proponent of the idea that U.S. manufacturing will come roaring back—predicts a surge in U.S. exports, partly helped by lower energy costs and stagnating wages. In a report for release Tuesday, BCG says rising exports and “reshoring” of production to the U.S. from China “could create 2.5 million to five million American factory and service jobs associated with increased manufacturing” by 2020. That, BCG says, could reduce the unemployment rate, currently 7.4%, by as much as two to three percentage points.

At present, about 12 million Americans are directly employed by manufacturers, down from nearly 17 million two decades ago. The Obama administration has made a manufacturing recovery a top priority, and major corporations are striving to showcase their efforts to create manufacturing jobs. On Thursday, Wal-Mart Stores Inc. is due to host 500 suppliers in Orlando, Fla., to discuss its “commitment to leading an American renewal in manufacturing” by buying more U.S.-made goods.
Europe’s long-running slump, slower growth in China and a stronger dollar have been headwinds for U.S. exporters, but many have managed to expand overseas sales.
Harley-Davidson Inc. continues to add dealers abroad. “We’re very excited about the growth prospects in our international businesses,” John Olin, chief financial officer, told analysts last month. The Milwaukee-based company recently said retail motorcycle sales jumped 12% in the Asian-Pacific region and 39% in Latin America in the second quarter.
Like many U.S. manufacturers, Harley since the 2008-09 recession has revamped its operations to create a smaller and more flexible workforce, resulting in annual cost savings of more than $300 million and making the company more competitive. Among the changes: The union at its plant in York, Pa., accepted the use of temporary workers, who can be dismissed without severance pay. The number of job classifications at York also fell to five from 62, so workers have a wider variety of skills and can go where needed. As restrictive working rules were eliminated, a 136-page labor contract was replaced by a 58-page document.
Evan Smith, president of Hanover, N.H.-based Hypertherm Inc., said sales of its metal-cutting tools have been growing this year in the Middle East and Latin America. Opening a distribution center in Brazil helped, he said.
Minneapolis-based Graco Inc. has increased sales in Central and Eastern Europe of equipment used to spray paint and other coatings on roads, bridges and buildings, said spokesman Bryce Hallowell.
Big companies, such as Caterpillar Inc. and General Electric Co., have moved some production back to the U.S. in recent years. Some foreign companies, such as tire maker Bridgestone Corp. of Japan, have expanded U.S. capacity, partly to serve customers in the Americas.
As the boom in shale “fracking” lowers natural-gas and electricity prices in the U.S., and wages stagnate, “the U.S. is steadily becoming one of the lowest-cost countries for manufacturing in the developed world,” the BCG report said. The U.S. will have an edge over rival manufacturing nations in energy costs, along with lower productivity-adjusted labor costs than Germany, Japan, France, Italy and Britain, the report said. That will allow the U.S. to grab a larger share of global manufacturing sales.
“This is a fundamental economic shift,” said Harold Sirkin, a senior partner at BCG, who helped write the report. “The trends are going faster than we thought,” he said, adding: “As much as people say we don’t make anything anymore, it’s just not true.”
Even so, the U.S. has lost much ground over the past 15 years, largely because of China’s surging growth and focus on exports. The U.S. accounted for 11% of global exports of manufactured goods in 2011, down from 19% in 2000, Mr. Preeg said. During the same period, China’s share rocketed to nearly 21% from 7%, and the European Union slipped to 20% from 22%.
China’s performance has cooled recently. U.S. exports of manufacturing goods to China surged 19% to $19.9 billion in the second quarter, Mr. Preeg said, but that is about one-fifth of China’s manufacturing exports to the U.S.
U.S. manufacturers still face big hurdles. Many can’t find enough skilled workers to operate and repair sophisticated computer-controlled machinery, a shortage worsened by the retirement of baby boomers. Faster economic growth in China, India and Brazil means many global companies still want to open more plants there. A U.S. corporate focus on quarterly results sometimes deters investment in factory equipment, while many U.S. firms say they pay higher taxes and get fewer subsidies than foreign rivals.
Meanwhile, China no longer relies heavily on labor-cost advantages to get a leg up on other countries. As wages rise, China has shifted to more exports of higher-tech items, including telecommunications equipment, computers and scientific instruments, Mr. Preeg said. Only about 15% of China’s manufacturing exports are in labor-intensive industries, such as textiles or shoes, he said.
Write to James R. Hagerty at bob.hagerty@wsj.com
A version of this article appeared August 19, 2013, on page A1 in the U.S. edition of The Wall Street Journal, with the headline: Manufacturers Gain Ground.
To become Made in USA Certified request a free quote here:  www.USA-C.com