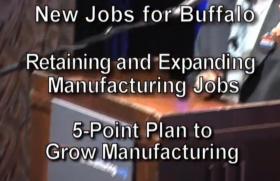 Rebuilding the manufacturing base and creating jobs in western New York is the focus of a town hall meeting being held in downtown Buffalo Monday night.
It’s called the ‘Keep it Made in America’ Town Hall. And it’s being hosted by the Alliance for American Manufacturing and the United Steelworkers.
The union’s District 4 Director John Shinn says the goal is to help business leaders, organized labor, elected officials, educators and citizens understand the role manufacturing can play in reinvigorating the economy.
“Citizens of the state, when they have these manufacturing jobs, they spend money. It helps the secondary businesses. One dollar paid to a worker in New York state in the manufacturing sector would role over to the area businesses three, four times.”
Shinn says governments can help by enacting policies that guarantee taxpayer funded projects use goods made in the USA. And he says the academic community can help by educating students with the necessary skills to fill jobs.
“There’s a demand for skilled labor positions within manufacturing and also semi-skilled labor positions…We have employers that can’t hire instrument technicians, electricians, welders, pipe fitters…these are good living-wage jobs.”
The meeting includes panel discussions, video presentations and opportunities for audience participation.  It gets underway Monday in Asbury Hall on Delaware Avenue at 6 p.m.