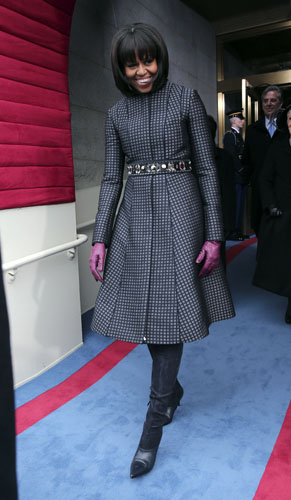 On the Roy G. Biv scale, the Obama family dominated the color spectrum in blues, indigos and violets Monday morning.
First Lady Michelle Obama stunned in a custom-designed, navy Thom Browne jacquard dress and coat, while her daughters dazzled in bright purple ensembles on Inauguration Day.
Thom Browne, a relatively obscure New York-based designer who grew up in Allentown, generated a tremendous amount of buzz within the realm of fashion and beyond after FLOTUS stepped out in his designs Monday. Although Browne, the brother of Pa. State Senator Pat Browne, is recognized largely for his contributions to menswear, the designer launched his womenswear line in 2011. Evidently, the President’s wife wearing his creation on Inauguration Day is a significant step forward in the women’s department for the designer. The two initially met at the Cooper-Hewitt National Design Museum awards in July 2012. Michelle Obama has since worn Thom Browne items to mark other public events.
The designer told the New York Times‘ Eric Wilson, “It’s one of those moments when I just can’t believe that happened.” The Today show’s Savannah Guthrie admitted she did not know who Browne was, although fans of the First Lady’s style will be well-acquainted with him soon.
As for the inspiration behind the outfit? Her coat – specifically the fabric – was created based on a man’s silk tie. Browne, who debuted his menswear line in Paris this weekend, told CNN‘s Alina Cho that he chose dark blue for the First Lady because he was “mindful POTUS might also wear navy.” Largely recognized for his menswear collections, Browne discovered that the First Lady had worn his designs Inauguration Day thirty minutes after viewers first spotted the Obama family at 9 a.m. The Inauguration went down one day after Browne caused fashion ripples in Paris where he debuted his Fall/Winter menswear line.
A fan of preppy American label J.Crew, FLOTUS linked the brand into her ensemble with her belt and shoes as she walked into St. John’s Church for a service earlier that morning. Regarding Obama’s use of the belt layered over the coat, J.Crew creative director Jenna Lyons told WWD, “It looks great. I hope Thom is alright with it.” The source of her lush, leather clover gloves were also a product of J.Crew – in good company with Italian luxury brand Portolano. As of Monday afternoon, the Valentina patent pumps werestill in stock on jcrew.com. The exact pair of gloves were nowhere to be found on the brand’s website, although interested buyers are recommended to scour auction websites like eBay.
She paired the outfit with a necklace by Cathy Waterman, while her cardigan was designed by another American designer – Reed Krakoff – whose creations she selected for Sunday’s swearing-in ceremony. The First Lady later swapped into boots later that morning, which were also designed by Krakoff according to a White House official.
Meanwhile, “Rosebud” Malia also wore an outfit from J.Crew, while her sister Sasha, Secret Service code named “Radiance,” wore a dress and coat from Kate Spade. Deborah Lloyd, creative director of Kate Spade New York told AP, “[Sasha] epitomizes the youthful optimism and colorful spirit of the brand. We are so proud to have been a part of this historic moment.” Lyons shared with Wilson that Malia’s coat was off the rack. Her buttons were customized for the affair. “You can see how the girls have grown up in the four years, and they’re still so alive and vibrant, but more sophisticated,” Lyons shared enthusiastically with the same media outlet.
As for their father, the President stepped outdoors in a blue tie, white shirt and dark suit, beneath the exact same Brooks Brothers overcoat he wore when he took the oath in 2009, WWD reports. Four years ago, the First Lady wore a sparkly yellow coat and dress by Isabel Toledo. Michelle Obama is a champion of consciously and thoughtfully selecting American designers to help raise their profiles.
Known for repeating outfits, she is unable to recycle this gem of a dress and coat. Her complete ensemble, including the accompanying accessories, will go to the National Archives.
Source: http://www.philly.com/philly/blogs/hautehouse_row/FLOTUS-First-Daughters-wear-Made-in-USA-designers-on-Inauguration-Day.html
Made in USA Certified Inc.