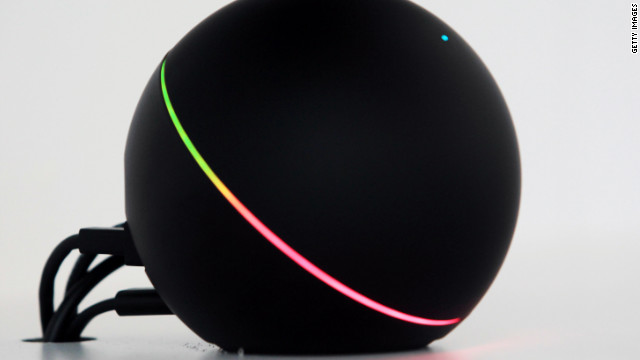 (CNN) — Forget the applications like video and audio streaming, or the built-in speakers. The most noteworthy feature of Google’s new Nexus Q device may be this: It’s made in the United States.
When Google rolled out the device at its developers conference in San Jose, California, on Wednesday, reporters noticed the words “Designed and Manufactured in the U.S.A.” etched onto the bottom.
The gadget, about the size and shape of a Magic 8 Ball, is billed by Google as “the first social streaming player.” It can be connected to a TV, has its own speakers, and can stream music and video from the cloud as well as connect an Android tablet or phone with home electronics.
Google hasn’t played up its origin, even though the vast majority of electronics are manufactured in China or other countries where labor is cheaper than in the U.S. A Google spokeswoman did not immediately reply to a message seeking comment for this story.
But The New York Times reported Thursday that it had been given a brief tour of the plant, which it says is about 15 minutes from Google’s headquarters in Mountain View, California, and that “hundreds” of employees appear to work making the Nexus Q. The tour was given on condition that the Times not report the factory’s exact location.

“We’ve been absent (from the U.S.) for so long, we decided, why don’t we try it and see what happens?” Andy Rubin, Google’s vice president in charge of the company’s Android operating system, told the Times.
Electronics companies, like those in many other sectors, for years have flocked to China to take advantage of cheap labor costs and loose business regulations.
Most famously, Apple has appeared in headlines over its relationship with Foxconn, the Chinese manufacturer that makes its iPads and iPhones. Foxconn has been accused of unsafe and unfair working conditions in recent years. Apple has announced it’s working to improve conditions at its supply-chain plants, and CEO Tim Cook visited a Foxconn factory earlier this year.
But as wages and other costs begin to increase in China, a handful of mostly smaller companies has begun bringing those jobs back to the States. Late last year, an analysis by the Boston Consulting Group predicted that 2015 will be a “tipping point” when it will make more sense for many industries to keep their plants closer to home.
“A surprising amount of work that rushed to China over the past decade could soon start to come back — and the economic impact could be significant,” said Harold L. Sirkin, a senior partner and lead author of the analysis. “We’re on record predicting a U.S. manufacturing renaissance starting by around 2015.”
The analysis predicts lower-tech manufacturing like textiles and apparel will stay overseas, while more complex products, like electronics and automobiles, might be more likely to be made in the United States.