U.S. companies, facing slowing markets and rising costs around the world, are taking a new look at their home market.
With growth slowing in China and a slump gripping much of Europe, companies are adding capacity in the U.S., replacing aging equipment and even moving overseas production back from low-cost labor markets, a sign that corporate America could be poised to take a bigger role in the economic recovery. 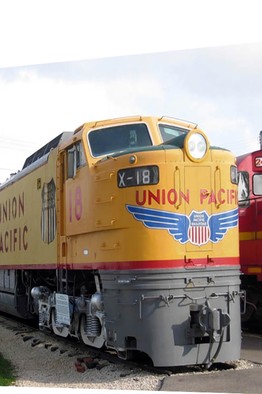 Christoph HitzUnion Pacific expects to buy twice as many locomotives this year, spending upward of $400 million.

The pace of earnings growth at companies slowed in the fourth quarter, and there are signs that profitability is falling. That is prompting companies ranging from beverage maker Coca-Cola Co. to industrial supplier Emerson ElectricCo. to disclose cost cuts. But after keeping a tight lid on costs for the past few years, many other companies are expanding capacity to meet rising demand. 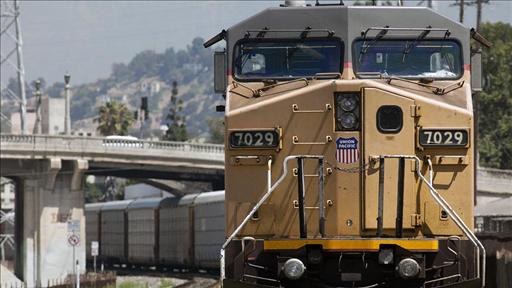 WSJ’s Bob Hagerty has the story of companies bringing staff and equipment back to the U.S. in the face of economic uncertainty in Asia and Europe. AP Photo/Damian Dovarganes

United Rentals Inc., the world’s largest equipment rental company, plans to increase its capital spending by about a third, to $1 billion, this year as more construction and industrial companies opt to rent rather than own equipment like elevated forklifts and backhoe loaders.Cummins Inc., which makes engines for trucks and heavy equipment, is boosting its capital spending to more than double the rate of two years ago.
Carlisle Companies, a small conglomerate that makes insulation, tires and restaurant supplies, plans to open two new plants in the U.S. and bring tire production back to the U.S. from China.Union Pacific Co. expects to buy twice as many locomotives this year, spending upward of $400 million. The auto industry is dusting off idled U.S. factories, adding work shifts and expanding production from Chattanooga, Tenn., to Belvidere, Ill., on rebounding car and truck sales. Some auto makers even hope to use the U.S. as a manufacturing base to export autos and auto-parts to Latin America and Asia.

“It is an environment that feels like it is building momentum,” William Plummer, United Rentals’ chief financial officer, said in an interview. “We are coming out of the depths of the recession and are starting to build momentum on the upside.”

U.S. businesses increased their investments in December. According to the Commerce Department, new orders for nondefense capital goods excluding aircraft, a proxy for how much companies spend on equipment, climbed 2.9% from November. That ended two months of declines, suggesting businesses are becoming more confident. Compared with a year earlier, companies shipped 9% more.
“Companies have piled a lot of cash on the balance sheet and delayed a lot of purchases,” said Joseph LaVorna, Deutsche Bank‘s chief U.S. economist, who expects capital expenditures, or capex, to grow in excess of 10% this year. “The capex story is very much alive and well, and capex and hiring go hand-in-hand.
There are signs that hiring may be picking up as companies expand facilities. Job growth in January was its highest level since April, with unemployment falling for the fifth consecutive month.
In addition, stubborn construction markets are showing signs of life, and that is helping companies like Caterpillar Inc., according to Andy Kaplowitz, a Barclays Capital analyst. The Peoria, Ill.-based equipment maker notched a 31% increase in its North American construction business, compared with Barclay’s estimate of a 20% gain.
“I’m feeling better about the U.S. economy than I was 12 months ago, for sure,” said Patrick Ward, chief financial officer at Cummins.
Fortune Brands Home & Security Inc., whose products include Master locks and Moen faucets, recently boosted its capital spending plans for 2012 to $80 million, up about 17% from last year, after seeing modest improvement in the U.S. economy, said Chris Klein, CEO of the Deerfield, Ill., company.
“It isn’t off to the races yet,” Mr. Klein said of the economy, “but it is definitely firming up.”
That may not mean major job gains. Most of the capital spending is on equipment that will improve production efficiency. For now, Fortune Brands has plenty of spare capacity and isn’t envisioning new plants. Its 12,000-person U.S. work force probably will expand only slightly this year, with gains mainly in product development and marketing, Mr. Klein said. 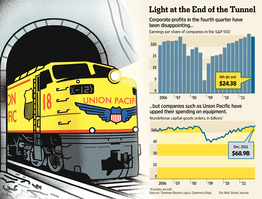 On the whole, fourth quarter earnings were weaker than expected amid sluggish growth in Europe and China, and executives voiced caution about 2012. Among the 301 companies in the Standard & Poor’s 500-stock index that have reported their quarterly earnings thus far, 28% missed analyst expectations, a greater proportion than the typical 20%, according to Thomson Reuters.
Companies that are making first-quarter forecasts are striking a mostly downbeat note. Of the 55 that have provided earnings forecasts, 43 said they expect the first quarter to be weaker, according to Thomson Reuters. That is the worst ratio since 2001. Profits for the final quarter of 2011 are up an average of 8.9% from a year earlier, and revenue is up 8.3%.

While the impact of the European slowdown has been muted, analysts have noted how China’s slowdown has eaten into profit. United Technologies Corp. said its Otis Elevator unit sales in China dried up in the fourth quarter compared with swift sales the quarter before. 3M Co. expects below-trend China growth for the first half of this year, after sales slowed markedly at the end of last year.
Despite China’s slump, companies still see opportunities overseas to buoy growth, which means the U.S. won’t grab all of the capital spending. Caterpillar, for instance, said about 60% of the $4 billion it earmarked for this year will be invested in the U.S. largely to expand existing facilities. Auto parts supplier Tenneco Inc. will boost capital spending as much as 15% as it expands business in emerging markets. Charlotte, N.C.-based Carlisle will be expanding a plant in Italy and building a new one in India.
But rising wages overseas, higher transportation costs and the shipping time of goods from China have prompted Carlisle to move tire production to Tennessee from China.
“We find it as cheap to manufacture in the U.S. as China,” Carlisle Chief Executive Dave Roberts wrote in an email. “We will still manufacture in China, but the idea would be to manufacture product for Asia in Asia, for the U.S. in the U.S.”
And strong domestic growth is driving Carlisle to open new factories in Seattle and Kingston, N.Y. “We are starting to see the nonresidential construction market strengthen a bit,” Mr. Roberts said in an interview. “The momentum continues.”