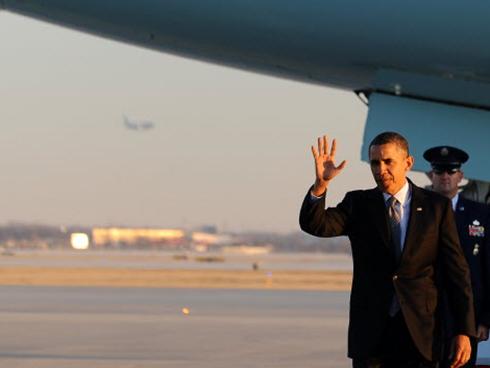 Photo Credit: Mandel Ngan, AFP
President Obama will propose tax breaks for companies that bring jobs back to the United States as part of an effort to boost the economic recovery.
Obama also will include $12 million in his proposed 2013 budget, to be released next month, to add staffing to a federal program that seeks to attract new businesses to the U.S.
The president made those announcements Wednesday at a White House forum on ‘insourcing’ jobs — bringing them back from overseas. He also said he will propose eliminating tax breaks for companies that outsource jobs to foreign countries.
“I do not want America to be a nation known for financial speculation and outsourcing and racking up debt buying stuff from other nations,” Obama said. “I want us to be known for making and selling products all over the world stamped with three proud words: ‘Made in America.’
“I don’t want the next generation of manufacturing jobs taking root in countries like China or Germany. I want them taking root in places like Michigan and Ohio, Virginia and North Carolina.”

Notably, those are all states that will be crucial to the president’s re-election next year — and which Mitt Romney, or whoever is the Republican nominee, will be trying to win back from 2008, when Obama won them all.
The idea of tax repatriation — letting companies bring profits back without taxing them on part or all of it — has been under consideration for years. It’s a favorite of Republicans and embraced by some pro-business Democrats as well.
It’s not at all clear that Obama will go the repatriation route. He’s more likely to offer incentives for companies that bring jobs, not just profits, back to the U.S.
“We are at a unique moment in our recent history where factors like rising American productivity and increasingly competitive costs at home mean the economic case to invest in America and bring jobs back home is strong — and getting stronger,” he said.
Meeting with Obama today were representatives from 14 companies that have returned jobs to the U.S. or decided to make new investments here. The complete list is below:

0 thoughts on “Obama To Propose Tax Breaks For 'Insourcing' Jobs”