WASHINGTON—The U.S. and Mexico unveiled a deal Thursday to resolve a longstanding dispute over cross-border trucking, an agreement that could help ease tense relations between the two neighbors. 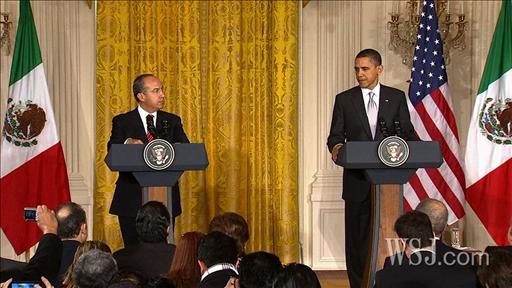 After nearly 20 years, the U.S. and Mexico have resolved a dispute over cross-border trucking that subjected the U.S. to billings in punitive tariffs. President Obama and Mexico’s Felipe Calderon comment on the agreement. Video courtesy Fox News.

The deal seeks to end a nearly 20-year ban on Mexican trucks crossing the U.S. border, a violation of the North American Free Trade Agreement that subjected $2.4 billion of U.S. goods annually to punitive tariffs by Mexico. Half of the tariffs will be suspended when the deal is signed by both nations, expected in about 60 days. The remainder will be lifted when the first Mexican hauler complies with a series of U.S. certification requirements, including English-language, drug and safety tests.

The new requirements for Mexican trucks are tougher than those established in Nafta and somewhat tougher than those currently in force for American truckers. Specifically, Mexican trucks will have to carry electronic recorders to ensure they do only cross-border, not domestic, runs and to track compliance with U.S. hours-of-service laws.
Nonetheless, the agreement appears to be a setback for U.S. labor unions, which have backed the ban in its various incarnations and opposed some other Obama administration trade initiatives, including efforts to conclude a trade pact with Colombia. Unionized U.S. truckers say the plan threatens their jobs. 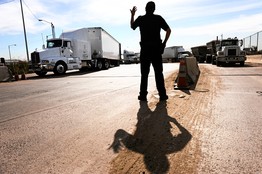 The trucking deal “caves in to business interests at the expense of the traveling public and American workers,” said International Brotherhood of Teamsters president Jim Hoffa. The union has long said that Mexican trucks and drivers are potentially unsafe, which the Mexican government disputes.
A senior administration official said a key concern was that Mexico would expand the list of U.S. products subjected to tariffs to include a broader range of manufactured goods.
“We were beginning to hear from farmers and businesses being hurt, and some closing, because of these retaliatory tariffs,” the official said.
The talks over the deal intensified in January. Details were being hammered out until an hour before the joint announcement from President Barack Obama and Mexican President Felipe Calderón. 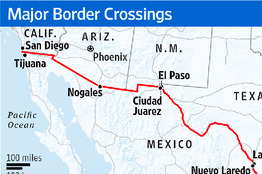 U.S. Chamber of Commerce President Tom Donohue said his group is “pressing the administration and Congress to finalize the agreement, move the United States into compliance, and allow an end to these job-killing tariffs.” The Chamber has led a coalition of industry and agriculture interests who wanted to overturn the trucking ban.
The ban has been one of a series of thorny issues in the U.S.-Mexico relationship, including drug-crime-related violence along the border. U.S. Immigration and Customs Enforcement agent Jaime Zapata was killed and another agent was wounded by gunmen a few weeks ago. It marks the first time a U.S.-law-enforcement official was killed in the line of duty in Mexico in several decades.
Mr. Calderón has said the U.S. should do more to help Mexico, including tightening gun laws and working to lower drug use in America, a continuing point of tension between the two countries. The two men sought to play down those differences Thursday. “We have to take responsibility just as he’s taking responsibility,” Mr. Obama said. “We’re putting more and more resources into this.”
The decision to permit Mexican trucks to enter the U.S. “is very important,” said Luis de la Calle, an international trade consultant and former Nafta negotiator. Mr. de la Calle said the decision would boost Mexico’s ability to compete in international trade by lowering transport costs. The agreement, by simplifying the border crossing process, could even increase border security, Mr. de la Calle said. 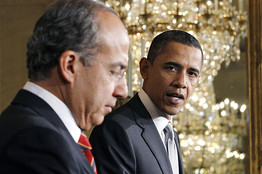 The pact is the latest twist in the White House’s complex relationship with organized labor. Unions still provide a large chunk of campaign cash to Democratic campaigns, and President Obama in his first two years in office extended a helping hand to organized labor. At the same time, the White House didn’t press for the unions’ top priority—a procedure dubbed “card check” that would have made it easier for U.S. workers to organize.
The Obama administration scored a coup in December by securing support from the United Auto Workers for a pending trade agreement with South Korea. But unions have since come out against a trade pact with Colombia, which Republicans in Congress say must be passed on a similar timeframe with the Korea agreement.
Mexican truckers were allowed into the U.S. under Nafta, which was signed in 1994. But unions and their allies in Congress repeatedly used legislation to block access. Nafta ruled in the late 1990s that Mexico could impose punitive tariffs, which it did in 2009, after Mr. Obama signed an unrelated bill that canceled a George W. Bush-era pilot program designed to grant temporary access to Mexican cross-border truckers.
The list of goods subjected to punitive tariffs has steadily increased since then, including U.S. construction equipment, pork, fruits and vegetables, a range of processed foods, even Christmas trees and suntan lotion, threatening an increasingly wide range of industries and their workers.
Thursday’s agreement “puts us back to where we were two years ago,” when Mexico first imposed tariffs, said Bill Graves, president of the American Trucking Associations, the industry’s chief lobbying group, which praised the agreement. “If I was one of the businesses being hammered by the tariffs for the past two years, I’d wonder whether it was all worth it.”
The Transportation Department hopes to have a proposed agreement available for congressional briefings and public notice and comment by late March or early April. After responding to public comments, the U.S. would finalize the agreement with Mexico. The U.S. Trade Representative’s office would then ensure the tariffs are lifted as agreed.
—José de Córdoba
contributed to this article.
Write to Elizabeth Williamson at elizabeth.williamson@wsj.com