Jump at Pump Squeezes Households in Exurbs, Could Lead to More Foreclosures

HOMESTEAD, Fla.—This Miami exurb flourished in the housing boom but has fallen hard during the bust, with one of the highest foreclosure rates in the nation for the past two years. Rising gasoline prices are making a bad situation even worse. 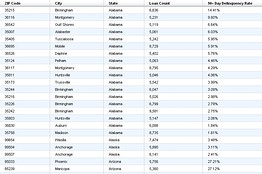 See the percentage of mortgages that are more than 90 days past due in cities across the country.

Home buyers priced out of the red-hot Miami market in the middle of the last decade flocked to places like Homestead, putting up with a longer commute in return for less expensive housing. Mortgages were easy to get and often began with low rates that would later rise. Homestead’s population, now about 50,000, rose dramatically during this time as thousands of homes were built and sold.

That all started crashing down in 2007. The first wave of foreclosures started when interest rates on adjustable-rate subprime mortgages jumped and lifted payments beyond what many could afford. With prices collapsing, foreclosures picked up momentum as borrowers who found themselves underwater—owing more on their homes than the homes were worth—started walking away. 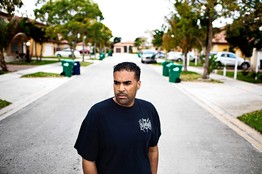 Jason Henry for The Wall Street JournalGas prices are squeezing Homestead, Fla., residents like Craig McBean, who commutes some 30 miles to Miami.

Higher gas prices are now hitting hard around Homestead, where many residents drive some 30 miles to work in Miami, adding to homeowners’ strain. So while the foreclosure problem is starting to abate in many cities, the problem in places like Homestead could grow.

“The people who bought in Homestead were generally people who were on the margin to begin with. It’s not a good sign when gas prices go up and become an added cost factor for these struggling homeowners,” said Ned Murray, associate director of the Metropolitan Center at Florida International University, a Miami-based applied-research institute.

Data prepared for The Wall Street Journal by CoreLogic Inc. showed that in two Zip Codes in the Homestead area, 33032 and 33033, more than 44% of all mortgages were three months or more delinquent as of November. Those were the highest rates in the country. A loan typically enters the foreclosure process once it is three months past due. (CoreLogic looked only at Zip Codes with more than 5,000 mortgages.)

The communities in the two Zip Codes are filled with modest, middle-class homes, many built from 2004 to 2006. Some of those homes are now empty after the owners left or were evicted. Some of those still around are considering leaving. 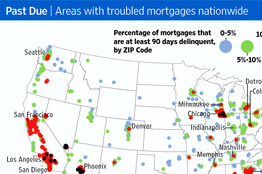 Of Homestead’s 21,300 mortgages, nearly 9,000 are severely delinquent, with 6,100 homes in a state of foreclosure and more than 900 owned by the bank and likely empty, CoreLogic said. Homestead says about 700 homes are vacant.

Among the struggling Homestead homeowners is 35-year-old firefighter Craig McBean, who purchased a three-bedroom home in 2005 for $250,000. Since then, the home’s value has fallen nearly 40% and his wages have been cut 20%. About two years ago, the monthly payments on his home jumped to $2,400 from the original $1,800, taking a big bite from his $45,000 annual salary. Still, Mr. McBean has held on and continued to make his payments.

But the rising price of gasoline, currently around $3.40 a gallon in the Homestead area, has hurt. Mr. McBean said his gasoline costs doubled in recent years and it now costs him $80 to $100 a week to fuel his 1997 Ford F-150 truck. And his expenses are likely to keep rising; energy analysts expect average gas prices to hit a peak somewhere between $3.75 and $4.25 nationally this summer, in part because of turmoil in the Middle East.

With the higher mortgage and gasoline costs, and a one-hour commute to Miami on Florida’s Turnpike, Mr. McBean is considering leaving Homestead, though he hopes to avoid foreclosure. “I would like to move somewhere closer to work,” he said. “The money I could save over three to four years, I could put down on another home.”

His predicament—and the pinch felt acutely in exurban America—is forcing some families to reconsider the total cost of living far away from urban centers, not just the cost of the actual home. “People thought they were getting a bargain when they were paying less” for a house, said Linda Young, research director at the Center for Neighborhood Technology. “What they didn’t realize is that the transportation costs could be even more.”

The Chicago-based nonprofit, which promotes public transportation and energy efficiency, estimates that in Homestead, housing and transportation together consume nearly half of the median $36,000 household income for the area.

“There are a lot of people stuck in far-out suburbs who are not going to be able to sell their homes because they made bad bets on the housing boom,” said Jack McCabe, a housing analyst with McCabe Research & Consulting in Deerfield Beach, Fla.
David Dabby, president of Dabby Group Advisors, a Miami-based real-estate consulting and valuation firm, said the majority of the homes built between 2004 and 2006 in the Homestead area have gone into financial distress or foreclosure.
“Cataclysmic is not the word, but it’s that type of event,” he said, noting that nearly 90% of all home sales over the past 18 months have been distressed sales.”That’s as high as you can get.”
Write to Dawn Wotapka at dawn.wotapka@dowjones.com