By DAMIAN PALETTA
The U.S. government has 15 different agencies overseeing food-safety laws, more than 20 separate programs to help the homeless and 80 programs for economic development.
These are a few of the findings in a massive study of overlapping and duplicative programs that cost taxpayers billions of dollars each year, according to the Government Accountability Office.
A report from the nonpartisan GAO, to be released Tuesday, compiles a list of redundant and potentially ineffective federal programs, and it could serve as a template for lawmakers in both parties as they move to cut federal spending and consolidate programs to reduce the deficit. Sen. Tom Coburn (R., Okla.), who pushed for the report, estimated it identifies between $100 billion and $200 billion in duplicative spending. The GAO didn’t put a specific figure on the spending overlap. 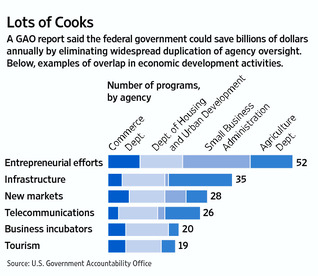 The GAO examined numerous federal agencies, including the departments of defense, agriculture and housing and urban development, and pointed to instances where different arms of the government should be coordinating or consolidating efforts to save taxpayers’ money.
The agency found 82 federal programs to improve teacher quality; 80 to help disadvantaged people with transportation; 47 for job training and employment; and 56 to help people understand finances, according to a draft of the report reviewed by The Wall Street Journal.
Instances of ineffective and unfocused federal programs can lead to a mishmash of occasionally arbitrary policies and rules, the report said. It recommends merging or consolidating a number of programs to both save money and make the government more efficient.
“Reducing or eliminating duplication, overlap, or fragmentation could potentially save billions of tax dollars annually and help agencies provide more efficient and effective services,” the report said.
There have been multiple efforts to cull the number of federal programs in recent years, but they often run into opposition from lawmakers in both parties who rush to defend individual spending provisions. In fact, GAO’s recommendations are often ignored or postponed by federal agencies and lawmakers, particularly when they could require difficult political votes.
The report says policy makers should consider creating a single food-safety agency because of a number of redundancies. The Food and Drug Administration makes sure that chicken eggs are “safe, wholesome, and properly labeled” while a division of the Department of Agriculture “is responsible for the safety of eggs processed into egg products.”
Spokespeople for the Department of Agriculture and FDA pointed to the Obama administration’s creation of the Food Safety Working Group, which works to better coordinate the government’s regulators.
The report says there are 18 federal programs that spent a combined $62.5 billion in 2008 on food and nutrition assistance, but little is known about the effectiveness of 11 of these programs because they haven’t been well studied.
The report took particular aim at government funding for surface transportation, including the building of roads and other projects, which the administration has made a major part of its push to update the country’s infrastructure.
The report said five divisions within the Department of Transportation account for 100 different programs that fund things like highways, rail projects and safety programs.
One program that funnels transportation funds to the states “functions as a cash-transfer general-purpose grant program, rather than as a tool for pursuing a cohesive national transportation policy,” the report said. Similarly, it chided the government over encouraging federal agencies to purchase plug-in hybrid vehicles while having policies that agencies reduce electricity consumption. It said government agencies have purchased numerous vehicles that run on alternative fuels only to find many gas stations don’t sell alternative fuels. This has led government agencies to turn around and request waivers so they didn’t have to use alternative fuels.
A spokesperson for the Department of Transportation said the president’s budget for fiscal year 2012 “proposes to cut waste, inefficiency and bureaucracy by consolidating over 55 separate highway programs into five core programs, and by merging six transit programs into two programs.”
On teacher quality, the report identified 82 programs that often have similar descriptions and goals and are spread across 10 federal agencies, including the Department of Education, the Department of Energy and the National Aeronautics and Space Administration. Nine of these programs are linked to science, technology, engineering and mathematics. Fifty-three of the programs are relatively small, receiving $50 million or less, “and many have their own separate administrative processes.”
The GAO highlighted 80 different economic development programs at the Department of Commerce, HUD, Department of Agriculture and Small Business Administration, that spent a combined $6.5 billion last year and often overlapped. For example, the four agencies combined to have 52 different programs that fund “entrepreneurial efforts,” 35 programs for infrastructure, and 26 programs for telecommunications. It said 60% of the programs fund only one or two activities, making them “the most likely to overlap because many of them can only fund the same limited types of activities.”

The report took aim at several military programs, which could prove thorny because many lawmakers from both parties are wary to cut defense spending. It said there were 130,000 military and government medical professionals, 59 Defense Department hospitals and hundreds of clinics that could benefit from consolidating administrative, management and clinical functions.
For example, it said the government “may have developed duplicate” programs to counter improvised explosive devices, with the Marine Corps and the Army paying to develop similar “mine rollers.” The Marine mine roller costs $85,000, and the Army mine roller costs $77,000 to $225,000. “Officials disagree about which system is most effective, and [the Pentagon] has not conducted comparative testing and evaluation of the two systems,” the report said. The Pentagon didn’t immediately respond to a request for comment.
The GAO study was required by a provision inserted by Sen. Coburn into a law that raised the federal borrowing limit last year. This report is the first produced in response to the provision.
Write to Damian Paletta at damian.paletta@wsj.com