By DAMIAN PALETTA and COREY BOLES

WASHINGTON—The White House projected Monday that the federal deficit would spike to $1.65 trillion in the current fiscal year, the largest dollar amount ever, adding pressure on Democrats and Republicans to tackle growing levels of debt.
The projected deficit for 2011 is fueled in part by a tax-cut extension that President Barack Obama and Republican lawmakers brokered in December, two senior administration officials said. It would equal 10.9% of gross domestic product, the largest deficit as a share of the economy since World War II. 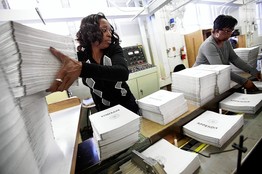 Associated PressWillow Wimbush, left, and Nancy Harris, work on copies of the Appendix of the fiscal 2012 federal budget on Thursday at the U.S. Government Printing Office in Washington.

The new estimate is part of Mr. Obama’s proposed budget for fiscal year 2012, which becomes public Monday morning.
Mr. Obama is proposing $3.73 trillion in government spending in the next fiscal year, part of a plan that includes budget cuts and tax increases that administration officials believe will sharply bring down the federal deficit over 10 years.
The deficit would decline in fiscal year 2012 to $1.1 trillion, or 7% of gross domestic product, under Mr. Obama’s plan, as a year-long payroll tax holiday and an extension of federal jobless benefits expired, administration officials said. By 2017, the budget plan says, the deficit would be shaved to $627 billion, or 3% of gross domestic product.
Senior administration officials said the new budget would address concerns about the country’s long-term fiscal challenges while spending more money on education and research programs that the administration says are needed to boost economic growth.
But Mr. Obama’s plan is likely to be rewritten by Republicans who control the House, as proposed spending cuts in his budget fall short of the reductions congressional Republicans are seeking.
Even before turning to Mr. Obama’s plan for fiscal year 2012, which begins Oct. 1, lawmakers are battling over levels of government spending for the remainder of fiscal year 2011, which House lawmakers will debate this week.
“We’re very eager to work with Republicans to cut spending and reduce our deficit,” a senior administration official said Sunday night.
At $1.65 trillion, the administration’s projection for the 2011 deficit is significantly larger than the $1.48 trillion estimated by the non-\partisan Congressional Budget Office a few weeks ago. In fiscal year 2010, the deficit was $1.29 trillion.
White House officials believe their budget proposal would shave $1.1 trillion off of accumulated federal deficits over 10 years, which they believe would push levels of federal spending into a healthier balance.
That would be less than the $4 trillion in reductions the White House’s deficit-reduction commission proposed in December, but it’s still a level administration officials believe is achievable and sustainable.
The budget wouldn’t do much, though, to arrest a future spike in the projected costs of Medicare, Medicaid, and Social Security. Mr. Obama has said he’s open to making changes in these programs, but he wants cooperation from Republicans before he will begin.
The savings in the budget come from a combination of spending cuts and increases in revenue. A five-year freeze on non-defense discretionary spending would save more than $400 billion over 10 years, the administration says.
The White House, in its plan for 2012, reduces certain programs to save an additional $33 billion. This includes more than $2 billion in cuts to travel, printing, supplies and other overhead costs. The plan also would cut more than $1 billion in grants to large airports and $950 million to revolving funds for state water treatment plants, among other things.
The proposed budget seeks to prevent many middle-class Americans from being subjected to the Alternative Minimum Tax, which would raise their tax bills, for three years starting in fiscal 2012. To cover the cost, the administration would put new limits on the ability of the wealthiest earners to utilize tax deductions to lower their tax burden, among them deductions for charitable contributions and mortgage interest.
The Alternative Minimum Tax was designed to ensure that wealthier earners do not use deductions to avoid most or all taxes. Lawmakers in both parties want to find a long-term solution that limits its growing reach into middle-class households. But Republicans are unlikely to agree to what, in effect, is a tax increase on wealthier Americans to pay the cost of doing so..
The budget will also propose averting scheduled reductions in payments to doctors who treat Medicare patients for the next two fiscal years, at a cost of $62 billion over 10 years. To cover the cost, savings would be found by making improvements in the health care delivery system that weren’t detailed by administration officials.
The White House will propose cutting 12 tax breaks to oil, gas and coal companies, which it projected will raise $46 billion in revenue over 10 years.
The budget calls for $148 billion in overall spending on research and development, which includes $32 billion in biomedical research at the National Institutes of Health. It would create 20 new Economic Growth Zones, providing tax incentives meant to attract investors and employers in hard-hit economic areas.
The tax deal agreed to by the president and congressional Republicans in December extended all current tax rates for two years, continued an expanded federal jobless benefits program for a year, and exempted most Americans from having to pay payroll taxes for a year. When it was signed into law, it was estimated the compromise would cost more than $850 billion over the next decade.
Write to Damian Paletta at damian.paletta@wsj.com and Corey Boles at corey.boles@dowjones.com