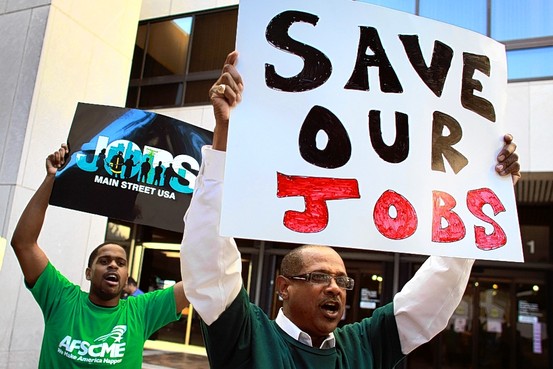 Two of the nation’s biggest public-sector unions, which together represent about 2.2 million government workers, are facing a backlash against the rising costs of public workers’ pay, benefits and pensions.
As states and local governments seek to trim costs in a difficult economy, the unions are struggling to defend pay and benefit packages negotiated when times were flush.
Last week, several hundred members of the American Federation of Government Employees, the largest federal employee union, marched to the Capitol from their conference at a Hyatt Regency hotel in Washington, D.C., and delivered petitions seeking to influence congressional debate
“We don’t want to be whining federal employees, but we want to ensure these decisions aren’t made too hastily,” said Terrence Johns, a union member from New Orleans who sought out Sen. Mary Landrieu (D., La.) and Sen. David Vitter (R., La.), among others.
During the conference, union members got tips on contacting local politicians, writing letters to the editor and using social media such as Twitter to debunk what public-sector union officials say is a myth that their members are paid more than private-sector workers.

Leaders of the union, which is known as AFGE, have asked members to contribute more to the organization’s political action campaign fund. “We don’t have a lot of time to try to turn around the American public’s opinion” that public-sector workers are to blame, said AFGE President John Gage. He criticized President Barack Obama’s proposal to save $28 billion by freezing pay for civilian federal employees, and said he wished Mr. Obama “would be standing up more for his employees.”
Meanwhile, leaders of the American Federation of State County and Municipal Employees, or AFSCME, plan to fight proposals in a growing number of states and cities that plan to roll back public workers’ compensation. Union leaders say they plan to focus on meeting with lawmakers, as well as a public relations campaign to showcase the value of government workers.
Government-employee unions maintain considerable influence. About 7.6 million public employees, or 36.2% of all public-sector workers, belonged to unions in 2010, down slightly from the year before. In the private sector, the unionization rate slipped to 6.9%.
In the 2010 midterm elections, public-sector unions contributed $20.5 million to federal candidates, parties and outside groups, up from $19.1 million in the 2008 election cycle, according to the Center for Responsive Politics. The share of contributions to Democrats rose to 92% in 2010 from 89% in 2008.
AFSCME accounted for $4.03 million of the contributions in 2010, ranking third among the top 20 public-sector union contributors. The AFGE ranked seventh at $981,240.
Unions also spend money on political efforts not directly tied to a candidate, with AFSCME reporting that it spent $91 million during the 2010 midterm elections.
With no federal elections this year, AFSCME officials said they will make fighting state battles their top political priority.
Public employees face pressure from such Democrats as New York Gov. Andrew Cuomo, who has said he would seek to cut $450 million in employee costs.
In Ohio, the new Republican Gov. John Kasich has indicated he wants to limit unions’ rights to bargain over issues such as work rules that can result in larger overtime payments or require certain levels of staffing. “We have to bring a little bit more control back to the management side of the ledger,” said his deputy director Pieter Wykoff.
AFSCME has countered Gov. Kasich’s proposals in part by backing a recommendation to set a retirement age of at least 55 for many public workers, with a requirement that they work for at least 32 years to qualify for their pension payouts. Under current rules, many such workers can retire at any age as long as they have 30 years of service.
In the months leading up to November’s midterm elections, AFSCME officials pressed Democratic allies to speed or extend contract settlements before the “bad people” took office, said AFSCME president Gerald McEntee, referring to Republican candidates he feared would be tougher on government workers and unions.
But in Wisconsin, the state legislature, controlled by Democrats, voted down a contract for state workers during the lame-duck session after Republicans swept to victory across the state.
Wisconsin’s new Republican Gov. Scott Walker said in an interview that he put “aggressive pressure” on legislators to vote no.
Last week, Mr. Walker proposed that state employees pay more for their health care and pensions, a change to save $30 million and help reduce the state’s $137 million deficit for the year ending June 30. The bill also proposed stripping many state and local workers of most collective bargaining rights, allowing them to negotiate only base pay. Local police, fire and state patrol workers would be exempted from the bargaining changes.
The Wisconsin arm of labor federation AFL-CIO, whose members include many public-sector unions, launched an ad campaign Sunday to protest the bargaining proposal and ask the public to call their legislators to “stop this radical move.”