BEIJING—The maker of China’s new stealth fighter jet has teamed up with a tiny, unprofitable California company to try to launch bids for U.S. defense contracts, possibly including one to supply Chinese helicopters to replace the aging Marine One fleet used by the president, according to people involved in the partnership.

Any Chinese bids for this or another contract under discussion would be certain to meet intense political resistance and would appear to have very little chance of success given mounting U.S. concern about China’s military power and long-term strategic goals, and the often-prohibitive opposition in the past to Chinese attempts to enter other strategic U.S. sectors, such as energy and telecommunications.
However, the fact that state-run China Aviation Industry Corp., known as AVIC, is even considering bids for these contracts, which industry insiders expect to be awarded in the next two to three years, reflects the rapid development and lofty ambitions of China’s aerospace industry.

AVIC has been in talks for more than a year with California-based U.S. Aerospace Inc. about offering the AC-313—China’s largest domestically produced helicopter—as the next generation of Marine One, the people involved in the partnership say.

They say the two companies have also been discussing putting forward AVIC’s new L-15 trainer jet as a candidate to replace the U.S. Air Force’s fleet of Northrop T-38s, which entered service 50 years ago and on which American fighter pilots learn skills such as how to fly at supersonic speeds.
That contract is expected to be one of the most lucrative military aviation contracts this decade, with the U.S. likely to buy about 400 and other allied countries about 600 more as the jet will become the standard for training pilots to fly the U.S. F-22 and F-35 stealth fighters.
AVIC already supplies civilian aircraft components to U.S. companies, but U.S. officials and lawmakers have expressed concern about U.S. technology being diverted to AVIC’s military arm through such cooperation. 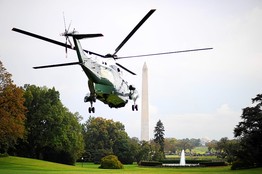 Agence France-Presse/Getty ImagesMarine One in Washington with President Obama on board.

Others have questioned the track record of U.S. Aerospace, which is headed by veteran aerospace executive Jim Worsham and is best known for an making an unsuccessful bid last year to enter cargo planes made by Antonov, a state-run Ukrainian company, in a competition to supply the U.S. Air Force with a new aerial tanker. The company, whose shares had traded over the counter, filed Jan. 28 with the Securities and Exchange Commission to deregister its stock. It reported a net loss for the quarter ended Sept. 30 of $11.5 million on revenue of $660,144.
However, U.S. Aerospace believes the idea of procuring defense products from China has support among contacts in the U.S. government and military who want to improve ties with Beijing and help cut defense spending.
U.S. Defense Department officials didn’t respond to requests to comment.
After years of supplying China’s armed forces, AVIC is now producing both civilian and military aircraft designed to compete in foreign markets, including the U.S. Last year, AVIC unveiled the first life-size mock-up of the C-919 passenger jet, which it is developing with the help of foreign companies as a direct rival to the Boeing 737 and the Airbus A320.
AVIC is also developing the J-20 stealth fighter, which made its first public test flight last month during a visit to China by U.S. Defense Secretary Robert Gates. The J-20 appears to be designed to rival the U.S. F-22 Raptor—now the world’s only fully operational stealth fighter.
The AC-313, which made its first flight last year, is powered by three engines made by Pratt & Whitney, a unit ofUnited Technologies Corp., and can seat up to 27 passengers and two crew members. It is designed to compete with the likes of Sikorsky and AgustaWestland in the global market for civilian helicopters. 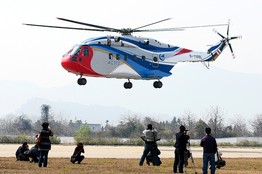 “It may sound ludicrous but that doesn’t mean it’s not going to happen,” said John Kirkland, a lawyer for U.S. Aerospace who is directly involved in the negotiations and authorized to speak on the company’s behalf.
“We want China to supply aircraft to the U.S. because we think it makes economic sense.”
Mr. Kirkland said the proposal under discussion was to import the Chinese aircraft as civilian products, without any military equipment, and then fit them with avionics, communications and other sensitive technology in the U.S.
He said that would ensure that the aircraft did not compromise national security, and complied with the Buy American Act.
“Nobody’s signed anything, but these are the things we’re discussing and we’re all hopeful that it goes somewhere,” he said.
Two AVIC officials confirmed that AVIC signed a “strategic cooperation” agreement with U.S. Aerospace in September.
The first phase of the partnership was to put together bids to supply aircraft components manufactured in China, said Zhang Wei, executive director of the supply-chain management and procurement division of AVIC International Holdings.
“Later, we can maybe enter the bids for the helicopter and trainer jets,” he said. “But this helicopter will be used by the American president, so there may be a lot of difficulties, not only technically, but politically.”
Email correspondence seen by The Wall Street Journal also showed that senior AVIC officials had been discussing the Marine One and trainer jet contracts with U.S. Aerospace for about a year, but worried about political opposition. U.S. lawmakers have also resisted big defense contract awards to foreign suppliers, even those with U.S.-incorporated subsidiaries.
Beijing was upset in 2005 when congressional opposition forced state-run Cnooc Ltd. to withdraw its bid to buy Unocal, a U.S. oil firm.
In a Senate hearing last month on the Air Force tanker procurement—which pits Boeing Co. and EADS North America, the U.S.-incorporated unit of European Aeronautic Defence & Space Co.—Sen. Claire McCaskill (D., Mo.), said it was “absolutely wrong” for a company subsidized by a foreign government to compete for U.S. defense money. “What if this company was owned by China?” she said. “Would we take that into consideration?”
In 2000, the U.S. Army recalled Chinese-made berets after lawmakers raised “buy American” concerns.
However, the Pentagon is now under pressure to upgrade essential military hardware at the same time as it has to cut defense spending by $78 billion over the next five years.
One of its many headaches is the Marine One fleet, which consists of 19 helicopters—11 Sikorsky VH-3Ds that entered service in 1976 and eight smaller Sikorsky VH-60Ns, which were introduced in 1989.
In 2005, the U.S. Navy awarded a contract to supply a replacement— dubbed the V-XX—to a U.S. team led byLockheed Martin Corp., for delivery between 2009 and 2014.
By 2009, however, the cost of the program had ballooned, and, under political pressure, President Barack Obama canceled the contract and asked the Navy to find a cheaper option.
The Navy says it released a fresh “Request for Information for the Presidential Helicopter Replacement Options” in February 2010 and is now in the “Analysis of Alternatives,” or AoA, phase before formal bidding opens.
The Air Force is also in the AoA phase in its search for a replacement for the T-38, which was the world’s first supersonic trainer when it entered service in 1961.
The leading contenders are Britain’s Hawk 128, Italy’s M-346, and the T-50, which was jointly developed by the U.S. and South Korea. China’s L-15 made its first flight in 2006, and was displayed for the first time overseas at the Dubai air show in 2009.
—Nathan Hodge contributed to this article.