For the first time in almost 50 years, the U.S. Army wants to replace the standard rifle shouldered by hundreds of thousands of frontline troops around the world.
The service this week advertised its interest in a new weapon that would incorporate futuristic sights and other advances in rifle design and be able to handle improved ammunition.
The gun would potentially supplant the M4 carbine, a shorter-barrel version of the M16, the Army’s main infantry weapon for decades. 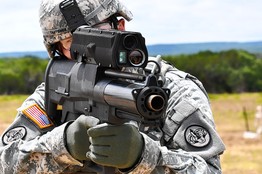 US Army A soldier with an XM25 weapon system, an advanced grenade launcher being tested by the Army.

Operations in Afghanistan—where troops often engage the enemy over long distances—have rekindled debate over the quality of the Army’s standard-issue rifles and their reliability in dusty, primitive conditions. An Army report on a 2008 battle in Wanat, Afghanistan, cited soldier complaints about jamming and overheating M4s, in particular. Nine servicemen died in that fight.
Critics have also raised concerns about the range and lethality of the 5.56 mm cartridge of the M16/M4.
Col. Doug Tamilio, the service’s project manager for soldier weapons, said in a statement the Army sought to find “the most effective, accurate, and reliable” weapon for its soldiers. “We’re challenging industry to develop the next-generation carbine and we’re looking forward to the results.”
An “industry day” for small-arms manufacturers is planned for March 30. The Army said it would pick a winner after two years of rigorous evaluation. Gerald Dinkel, the president and CEO of Colt Defense LLC, said the Army has “held out the M4 as a high standard, and somebody is going have to come out and really beat it.”
The M16, made by both Colt and FN Manufacturing LLC, a unit of FN Herstal SA of Belgium, along with the M4, have long enjoyed the loyalty of Army leaders who say the weapons are “combat proven.” The M4 has slightly less range than the M16, but is easier to handle, particularly in urban combat. 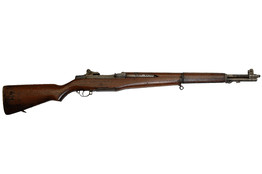 AlamyThe M1 Garand entered service in the 1930s. The .30-calibre rifle weighed about 10 pounds and had a range of around 500 meters. 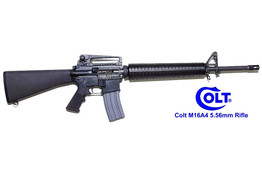 But Army commanders have also long faced questions about the rifles’ design: Both are built around a gas-operated system that cuts down on moving parts, but requires consistent cleaning.
Experts have often noted that the M16/M4 also fares poorly in terms of ruggedness and reliability compared with Soviet-designed Kalashnikov assault rifles, which are a favorite weapon of insurgents around the world.
In 2007, the M4 fared worse than three other weapons—the Heckler & Koch HK416, the FN Herstal Mk16 Special Operations Combat Assault Rifle and the Heckler & Koch XM8—in comparative reliability testing conducted by the Army.
The current M16 and M4 in many respects bear little resemblance to Vietnam-era antecedents: They are usually have advanced optics, and can be fitted with accessories such as flashlights. But critics on Capitol Hill, including Sen. Tom Coburn (R., Okla.), have in the past questioned why the service chose to stick with upgrades instead of seeking a replacement.
In Afghanistan, the Army has introduced the M14 Enhanced Battle Rifle, an upgraded version of the M14 rifle, which is chambered for a full-power rifle round that has a longer effective range than the M4 or M16. The Army is also experimenting with more futuristic infantry weapons in Afghanistan.
In parallel with the contest for a new rifles, the Army is considering additional improvements to the M4, including ambidextrous controls. The Army may also study alternatives to the rifle’s gas operating system, according to an official fact sheet.
Last year, the service began field trials of the XM25 Counter Defilade Target Engagement System, an advanced grenade launcher equipped with a laser range finder and onboard computer.
It fires a programmable 25mm round that is designed to go off just above—or just behind — its target. The concept is to create a lethal weapon that can hit enemies behind cover.
James Carafano, a retired Army officer who is a senior fellow at the Heritage Foundation, predicted in a recent interview that more of these weapons would soon be in the hands of the individual soldier.
“Precision weaponry is going to get really personal,” Mr. Carafano said. “You’re eventually going to see an individual soldier dropping a round down a chimney.”
Write to Nathan Hodge at nathan.hodge@wsj.com