Even as organized labor’s share of America’s public and private work force continued to slide last year, unions appeared to be growing in one place, among government managers and high-paid workers.
In Seattle, prosecutors and supervisors at the city’s electric utility both have formed collective bargaining units in the past year, while in central Minnesota, managers at a regional library system have created its first union of any kind. In Sacramento County, Calif., a group that includes management engineers and lawyers nine months ago voted to become a collective bargaining unit for the first time.
Washington state’s Public Employment Relations Commission saw 43 petitions filed by unions seeking to represent supervisory workers between 2008 and 2010, as governments’ fiscal positions weakened amid the nation’s economic woes. That was up from 23 such petitions over the previous three years, when times were flusher.
John Brosnan, executive director of the Illinois Labor Relations Board, said his agency, which administers the state’s law governing public-worker unions, has also seen a jump in petitions from workers with “higher-rated titles” seeking to organize. Those higher-paid workers appear to be seeking protection at a time of widespread belt-tightening, he said.
The moves come as union membership as a whole continues to slide in the U.S., both in the public and private sectors. Union members accounted for only 11.9% of the work force in 2010, the Labor Department reported Friday, down from 12.3% in 2009 and far below the peak of 28.3% hit in 1954.
View Full Image 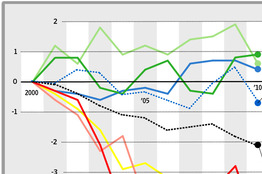 The 7.6 million government workers in unions made up more than half of the 14.7 million workers in the U.S. who belonged to a union last year, with the state and local government sectors among the most heavily unionized in the economy. Friday’s Labor Department report showed union membership in the public sector slipped to 36.2% in 2010, down from 37.4% the year before, in part reflecting government work-force layoffs.
Forming unions is no guarantee of better wages or benefits. But in practice, simply filing a petition to form a union can prevent pay cuts. That’s because governments that allow their employees to unionize are typically barred from making such changes during union organizing, because it could be construed as an illegal attempt to keep the workers from joining.
“Filing a petition makes it a little bit more difficult for a public employer to make a unilateral change to a pension without getting hit with a possible unfair labor-practice charge,” said Peter Kirsanow, a Cleveland attorney and former member of the National Labor Relations Board.
Efforts to unionize managers could make it harder for cities to trim their budgets, according to Michael Kolb, executive director of the National Public Employer Labor Relations Association, a trade group for high-level government managers, who often negotiate with unions. “It’s a roadblock to balance the budget, because it’s another process you have to go through,” he said.
While nonunion supervisory workers represent just a small slice of government employees, in many cases they are “on the chopping block first” because governments can reduce pay and benefits unilaterally, according to Mr. Kolb.
That’s what happened in Emeryville, Calif., a small city just across the bay from San Francisco. Last summer, Emeryville managers lost the ability to get cash in lieu of certain days off.
Hoping to ward off more anticipated cuts, some two dozen managers formed the Confidential, Administrative, Managerial and Professional Employees union late last year. Margaret O’Brien, the new union’s president, cited a July city council meeting, when a council member said the city was cutting managers’ benefits because, unlike with unions, they could do so without negotiating. “The question becomes at what point do they stop imposing because they can?” Ms. O’Brien said.
Ms. O’Brien has never been in a union and said it felt “a little unusual” being a union president now. Her small group was decidedly against affiliating with a national group, such as the Service Employees International Union that represents many of the city’s lower-level workers. “The overwhelming concern was when you associate with a national group, their politics can be your politics,” she said.
Public-sector unions at the state and local levels have no federal protection and are governed by state law. Twenty-five states and the District of Columbia give collective bargaining rights to most types of public workers, according to the American Federation of State, County and Municipal Employees.
Managers at the state and local level can typically join unions, in contrast to private-sector managers, who are generally barred from joining unions under federal labor law. Public-sector managers often form their own bargaining units, but in some cases they can join the same unions as their staff, creating potential bargaining conflicts over pensions and other issues.
State and local tax revenues, though once again growing, are still below peak levels in 2008, and money from the 2009 federal stimulus act, which helped prop up budgets, has been largely spent. Concerns about cities’ ability to get their fiscal houses in order have roiled the municipal bond market, raising borrowing costs for many cities.
In general, unions have had more success organizing new members in the public sector, compared with the private sector, which is one reason a majority of union members now work for the government. Unions win more than 90% of organizing elections in the public sector, compared with roughly 65% in the private sector, according to Kate Bronfenbrenner, director of labor education research at Cornell University. She attributes the higher success rate partly to less opposition by government agencies to union organizing.
Write to Conor Dougherty at conor.dougherty@wsj.com and Kris Maher atkris.maher@wsj.com