The Obama administration plans to intensify a crackdown on employers of illegal immigrants with the establishment of an audit office designed to bolster verification of company hiring records.
In an interview, John Morton, chief of U.S. Immigration and Customs Enforcement, a unit of the Department of Homeland Security, said the Employment Compliance Inspection Center would “address a need to conduct audits even of the largest employers with a very large number of employees.” The office would be announced Thursday, he said. 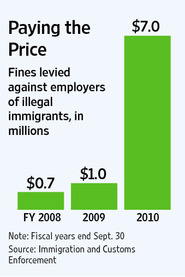 Mr. Morton said that the center would be staffed with specialists who will pore over the I-9 employee files collected from companies targeted for audits.
In the fiscal year that ended Sept. 30, 2010, ICE conducted audits of more than 2,740 companies, nearly twice as many as the previous year. The agency levied a record $7 million in civil fines on businesses that employed illegal workers.
Enforcement activity during the Bush administration focused on high-profile raids in which thousands of illegal immigrants were arrested and placed in deportation proceedings. Relatively few companies and their executives were prosecuted.
In contrast, the Obama administration has made employers the center of its immigration policy with “silent raids.” Critics say the policy has penalized small employers while failing to target larger employers.
Mr. Morton said the new center would have the “express purpose” of providing support to regional immigration offices conducting large audits. “We wouldn’t be limited by the size of a company,” he said.
The audits, which have affected garment makers, fruit growers and meat packers, result in the firing of every illegal immigrant on a company’s payroll. Companies say this has hurt them, especially as they can’t attract American workers even during an economic downturn.
Last year, for example, Gebbers Farm, an agricultural concern in Brewster, Wash., dismissed an estimated 550 workers—about a quarter of the local population—after ICE told the company a number of its employees’ hiring documents were suspect. The company declined to comment for this article.
Tom Roach, an immigration attorney in Pasco, Wash., said a client lost more than half of his workforce last year owing to an audit. “He had paid every nickel of taxes on them,” he said. But the employees had presented social-security cards that the landscape company couldn’t discern were fake, said Mr. Roach.
Small business owners, in particular, say they don’t have the ability to police their workers. They also fear discrimination suits, as some companies have experienced, for demanding additional documents from workers whom they suspect are in the country illegally. 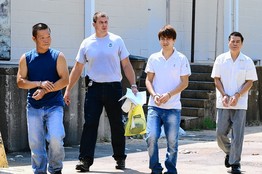 Angelo Paparelli, an immigration attorney in New York and southern California, said: “We need to take employers out of the business of performing government functions, like playing immigration police.”
“Ultimately, it is in a company’s best financial interest to proactively comply with the law now rather than to face potential fines or criminal prosecution for noncompliance in the future,” an ICE spokeswoman said.
Mr. Morton said ICE was also seeking to expand a program enabling businesses to work with the federal government to ensure they are employing people authorized to work in the U.S. Called IMAGE, or ICE Mutual Agreement between Government and Employers, the voluntary program includes training and assessments to help a company guard against hiring illegal employees.
Mr. Morton will also announce Thursday that Tyson Foods, Inc., which employs 100,000 people and has fought immigration troubles in the past, has joined the program, agreeing to an audit of “a certain portion of existing records.” The poultry processor, which says it has already taken steps to maintain a legal workforce, also agreed to establish an internal auditing process, Mr. Morton said.
Mr. Morton suggested Tyson could pave the way for other big companies to join the program. Tyson faced federal human-smuggling charges in a high-profile trial that resulted in acquittal in 2003.
“We…believe this partnership will enhance our ability to collaborate with government officials on immigration-related matters,” said Tyson Chief Human Resources Officer Ken Kimbro.
“Tyson realized that employment of unauthorized workers posed a risk to their operations and stepped forward to manage that risk,” says Mark Reed, a former immigration agent who runs Border Management Strategies, a consulting firm which has advised Tyson.
Since ICE initiated the IMAGE program in 2006, only 115 companies have signed on, with many reluctant to open their books to government scrutiny and to invest in training and new systems to bolster their employer-verification process, experts say.
About 11 million illegal immigrants live in the U.S., according to government estimates. Without them, experts say, such industries as construction, lodging and agriculture would be forced to radically change how they operate—sharply boosting costs for consumers or curtailing the services they provide.