U.S. manufacturing, viewed as a lost cause by many Americans, has begun creating more jobs than it eliminates for the first time in more than a decade.
As the economy recovered and big companies began upgrading old factories or building new ones, the number of manufacturing jobs in the U.S. last year grew 1.2%, or 136,000, the first increase since 1997, government data show. That total will grow again this year, according to economists at IHS Global Insight and Moody’s Analytics. 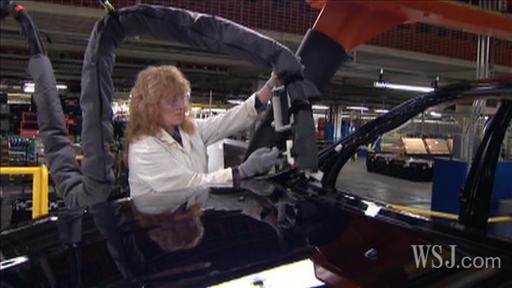 James Hagerty has encouraging news from the U.S. manufacturing sector, which is adding more jobs than it’s losing for the first time in more than a decade.

Among others, major auto makers—both domestic and transplants—are hiring. Ford Motor Co. announced last week it planned to add 7,000 workers over the next two years.

The economists’ projections for this year—calling for a gain of about 2.5%, or 330,000 manufacturing jobs—won’t come close to making up for the nearly six million lost since 1997. But manufacturing should be at least a modest contributor to total U.S. employment in the next couple of years, these economists say.

After a steep slump during the recession, manufacturing is “the shining star of this recovery,” says Thomas Runiewicz, an economist at IHS. He expects total U.S. manufacturing jobs this year to rise to about 12 million. Currently, manufacturing jobs account for about 9% of all U.S. nonfarm jobs; the average pay for those jobs is roughly $22 an hour, or nearly twice the average for service jobs, according to government data. 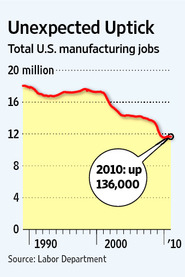 Despite the upbeat forecasts, job growth may remain modest because many companies are finding ways to increase production through greater efficiency and automation, without adding many workers. In the third quarter, U.S. manufacturing productivity increased as output rose 7.1% from a year earlier and hours worked grew just 3%. Conrad Winkler, a vice president at the consulting firm Booz & Co. who focuses on manufacturing, says manufacturers are being very cautious in their hiring, partly to avoid the risk of having to lay off people later on.
“Manufacturing is going to be a significant source of job growth over the next decade,” says Mark Zandi, chief economist at Moody’s Analytics. He says U.S. manufacturers that survived the brutal 2008-09 recession are now very competitive, with much lower labor costs and debt burdens, and so can afford to expand. While they will keep building factories overseas to address demand in emerging markets, they also will invest in U.S. plants, Mr. Zandi says. He expects manufacturing job growth to average about 2% a year through 2015. 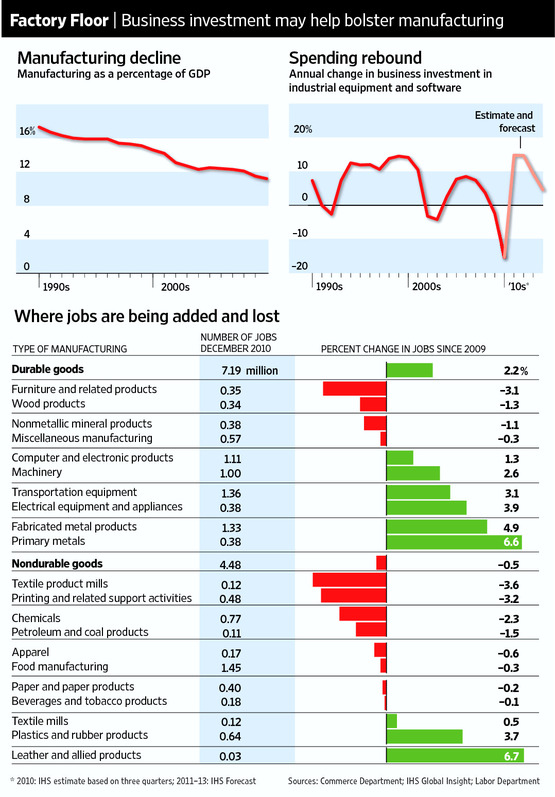 The job growth is expected as companies replace aging equipment, take advantage of government incentives, seek energy savings and rediscover that it makes sense to produce some products, such as ovens and construction machinery, at home rather than shipping them long distances. A new tax break, approved by Congress in December, is expected to further stimulate investment by letting companies deduct from taxable income 100% of certain types of investments in 2011.
Whirlpool Corp., which has 39 factories world-wide, including nine in the U.S., had a tough decision to make last year. Parts of its oven and cooktop factory complex in Cleveland, Tenn., are more than 100 years old. The labyrinthine layout of the plant, built on a slope and cobbled together over the past century, requires a fleet of more than 100 forklifts to shuttle products along ramps connecting 13 different levels. Temperatures sometimes top 100 degrees inside the plant, which has no air conditioning. Alan Holaday, who heads North American manufacturing for Whirlpool, calls the plant “an industrial museum.” 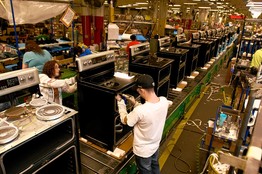 Alex McMahan for The Wall Street JournalMelissa Hayes and Brandon Epperson assemble an oven at the Whirlpool plant in Cleveland, Tenn., Tuesday.

One obvious option was to move production of the cooking appliances to Mexico, where Whirlpool already has several factories and where its South Korean rivals make some of their cooking products. But, after months of study, Whirlpool decided in mid-2010 to spend $120 million on a new plant in Cleveland, a few miles from the old one, in what will be the company’s first new U.S. factory since the mid-1990s. Whirlpool projects that its work force in Cleveland will grow to 1,630 within about two years from 1,500 now as production increases.

Although labor costs would be lower in Mexico, Whirlpool found lots of reasons to stay in the Cleveland area. It already had a trained work force there and wouldn’t need to pay severance costs. Freight costs would be lower since most of the plant’s products are sold in the U.S. Tennessee also looked safer than Mexico, which has been beset with drug-related violence. And state and local governments were willing to kick in about $30 million of incentives—including grants and property tax breaks—if Whirlpool stayed in the area. Most of the new jobs at the Whirlpool plant will be for assemblers, a spokeswoman said.

Caterpillar Inc. is building a $120 million plant to make excavator machines in Victoria, Texas. The plant will produce some machines that currently were being shipped from a Caterpillar plant in Japan to North American customers. That means the North American customers will get faster deliveries, and the Japan plant can devote more capacity to the booming Asian market. In return for creating 500 jobs in Texas, Caterpillar also got incentives from state and local authorities, including tax breaks and 320 acres of free land. Those jobs will include assemblers, engineers and logistics experts.

Dow Chemical Co. is building a 800,000-square-foot plant near its headquarters in Midland, Mich., to design and make batteries for hybrid and electric vehicles. In addition, Dow aims to expand a pilot project, also in Midland, in which it is making solar roof shingles that generate electricity. Such spending also creates jobs at suppliers. Dow cites estimates that every new job inside a chemical plant creates five jobs at suppliers and other related firms.

All of this doesn’t herald a miracle recovery for manufacturing, which accounted for 11% of U.S. economic output in 2009, down from 27% in 1950. In a new book, Dow Chemical CEO Andrew Liveris, argues that U.S. manufacturing faces continued decline unless the government comes up with a strategy to boost it, including bigger tax breaks and government support for R&D.
Another risk is that manufacturing jobs will start to vanish again if the U.S. economy can’t sustain its current recovery and slips back into recession. Still, rising industrial production and capital investments are signs that manufacturing will remain a significant part of the U.S. economy at least in the near term.
Write to James R. Hagerty at bob.hagerty@wsj.com