WASHINGTON—The Export-Import Bank of the U.S. is taking on China’s export machine, in a deal designed as a model for developed nations to challenge China in markets around the world.
In a move crafted with White House involvement, the U.S. export-financing agency agreed for the first time to match China’s cheaper financing terms to get the Pakistan government to buy 150 General Electric Co. locomotives. 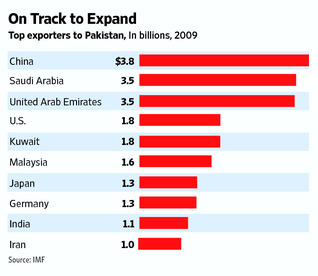 The financing terms for the $477 million deal required the U.S. to work with the Organization for Economic Cooperation and Development, a multilateral organization that monitors export-financing terms by developed countries—but not by China—to attempt to provide a level playing field.
The move is one of several challenges the Obama administration has made to China, the world’s largest exporter, as its president, Hu Jintao, prepares to visit Washington next week.
“They’re winning deals in part because they’re not playing by the rules,” Ex-Im Bank Chairman Fred Hochberg said in an interview. “This says: We’re not going to sit idly by and let you buy business. We will compete and make sure you stand toe to toe with American companies and American workers.”
The Ex-Im Bank deal is one of several steps the Obama administration has taken to pursue its goal of doubling U.S. exports over five years. The U.S. and other governments have been pressing China to let its currency appreciate, which would make Chinese exports more expensive. The administration also has brought complaints against China at the World Trade Organization, most recently challenging Chinese subsidies for production of wind-power equipment.
“Anytime the U.S. wins a trade case…it opens the door for other countries,” said Eswar Prasad, a professor of trade policy at Cornell University and former head of the International Monetary Fund’s China division. “It opens the floodgates for other countries and it emboldens other countries to act more forcefully against China.” But, he added, “how far you can push that strategy remains to be seen.”
The Pakistan deal was seen as a key test case by the Ex-Im Bank, which financed $25 billion of exports in the fiscal year that ended in September 2010. China’s export-financing arm has ramped up in the past decade to support its exports. U.S. officials estimate that the Chinese agency already finances more than the total export financing of the Group of Seven industrialized nations combined.
The Chinese Embassy in Washington didn’t immediately respond to requests to comment. 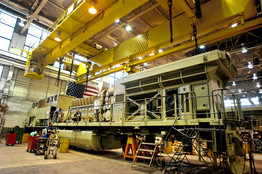 Bloomberg NewsA General Electric plant in Erie, Pa., pictured, will manufacture the locomotives for Pakistan Railways. The deal, expected to support about 700 jobs in the U.S., fits with the goal of increasing American exports.

Pakistan had indicated its interest in buying locomotives made by GE if the U.S. matched China’s financing terms, which were sweeter than those allowed by the OECD agreement. The Chinese railcars were 30% to 50% cheaper than the GE products, but U.S. officials said Pakistan wanted the American equipment.
“The underlying premise has been that we ought to let products compete on their own merits, their own quality, their own value, and not let financing be a distorting factor,” Mr. Hochberg said. China, not an OECD member, has long operated outside the group’s agreed-upon terms. “Tolerance of that began to wear thin over the last 18 months,” Mr. Hochberg said.
Early last year, the Ex-Im board agreed to finance about $437 million of the deal under a 12-year loan. It would carry a lending rate, tied to Treasury bond yields, that is now about 3% and an exposure fee of 8.2%. Ex-Im Bank notified the OECD, and officials said other OECD members encouraged the bank to move forward as a challenge to China’s practices. The locomotives, which Pakistan’s government plans to buy over two years, will be manufactured in Erie, Pa. The deal, expected to support about 700 U.S. jobs, has been approved by Pakistan pending a review by its Supreme Court.
“We are pleased that Ex-Im Bank offered fair, competitive and transparent financing to Pakistan Railways in support of GE’s proposal,” GE said in a statement Tuesday. “Ex-Im Bank’s financing creates a level playing field for U.S. companies to compete and, ultimately, lays the foundation to sustain existing and to create new U.S. high-tech manufacturing jobs.”
Officials at the U.S. Treasury, State Department, Commerce Department and White House were involved in striking the deal with Pakistan, which is important to U.S. strategic interests.
Last month, Chinese Premier Wen Jiabao visited Pakistan and promised billions of dollars in infrastructure spending. The Chinese are building rail and road links from Xinjiang down through Kashmir to the Arabian Sea, and also financed the port of Gwadar on the Arabian Sea coast, through grants and concessional financing. Pakistan imports more than twice as much in goods from China annually as it does from the U.S. The U.S. has reoriented its aid in Pakistan to focus more on infrastructure, in part to challenge China. That has antagonized India, which is especially angered by the Kashmir rail link through disputed territory. The U.S. hopes its new focus will help influence Pakistan to be more pliable in fighting Taliban militants and help boost the U.S.’s image with Pakistanis.
The Chinese are expected to try to avoid embarrassment in the Hu-Obama meeting next week, and the Obama administration is expected to play on that to press China for changes in trade, foreign exchange and national-security policies. But thus far China’s military has rebuffed U.S. calls for regular high-level defense talks.
In the U.S., the administration isn’t the only player setting the tone. On Tuesday, the U.S.-China Economic and Security Review Commission, a panel created by Congress that often takes a hard line on China, said growing Chinese strength in telecommunications could pose a danger for the U.S. “This greater potential role for China has generated concerns regarding corresponding potential national security implications of manufacturing and investment by China’s telecommunications companies,” its report said.
At least one House panel, the Foreign Affairs Committee, is considering holding hearings during Mr. Hu’s visit on China’s human rights, economic and foreign exchange practices.
—Bob Davis and Tom Wright contributed to this article.
Write to Sudeep Reddy at sudeep.reddy@wsj.com