BEIJING—Foreign companies have been teaming up with Chinese ones for years to gain access to the giant Chinese market. Now some of the world’s biggest companies are taking a risky but potentially rewarding second step—folding pieces of their world-wide operations into partnerships with Chinese companies to do business around the globe. 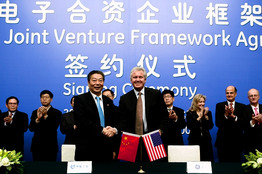