ZHUHAI, China—A year after the collapse of the Soviet Union, a cash-strapped Kremlin began selling China a chunk of its vast military arsenal, including the pride of the Russian air force, the Sukhoi-27 fighter jet.
For the next 15 years, Russia was China’s biggest arms supplier, providing $20 billion to $30 billion of fighters, destroyers, submarines, tanks and missiles. It even sold Beijing a license to make the Su-27 fighter jet—with imported Russian parts. 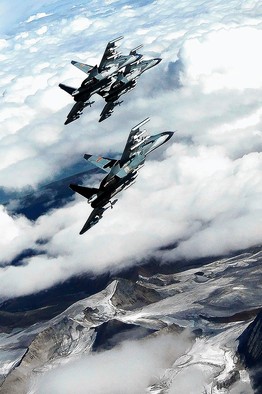 Associated PressChinese fighter jets, believed to be J-11Bs, train over Tibet in July.

“We used to be the senior partner in this relationship—now we’re the junior one,” said Ruslan Pukhov, of the Russian Defense Ministry’s Public Advisory Council, a civilian advisory body to the military.
Russia’s predicament mirrors that of many foreign companies as China starts to compete in global markets with advanced trains, power-generating equipment and other civilian products based on technology obtained from the West.
In this case, there is an additional security dimension, however: China is developing weapons systems, including aircraft carriers and carrier-based fighters, that could threaten Taiwan and test U.S. control of the Western Pacific.
Chinese exports of fighters and other advanced weapons also threaten to alter the military balance in South Asia, Sudan and Iran.
China’s military muscle still lags far behind that of the U.S., by far the world’s largest weapons manufacturer and exporter. China accounted for 2% of global arms transfers between 2005-2009, putting it in ninth place among exporters, according to the Stockholm International Peace Research Institute (SIPRI).
But no other Asian country has sought to project military power—and had the indigenous capability to do so—since Japan’s defeat in 1945.
China’s rapid mastery of Russian technology raises questions about U.S. cooperation with the civilian faces of Chinese arms makers.
The Aviation Industry Corp. (AVIC), China’s state aerospace company, builds fighters, for instance. But it is also making a new passenger jet with help from General Electric Co. and other U.S. aerospace companies. A GE official says the company has partnered with foreign engine manufacturers for decades “with elaborate protections built in place” that have preserved the company’s intellectual property.
There are also implications for U.S. weapons programs. Last year the Pentagon decided to cut funding for the F-22—currently the most advanced fighter deployed in the world—partly on the grounds that China wouldn’t have many similar aircraft for at least 15 years.
But then Gen. He Weirong, deputy head of China’s Air Force, announced that Chinese versions of such jets were about to undergo test flights, and would be deployed in “eight or 10 years.”
The Defense Intelligence Agency now says it will take China “about 10 years” to deploy stealth fighters in “meaningful numbers.”
For Moscow and Beijing, meanwhile, a dispute over the intellectual-property rights to such weaponry is testing their efforts to overcome a long historical rivalry and build a new era of friendly ties.
“We didn’t pay enough attention to our intellectual property in the past,” said a Russian defense official. “Now China is even competing with us on the international market.”