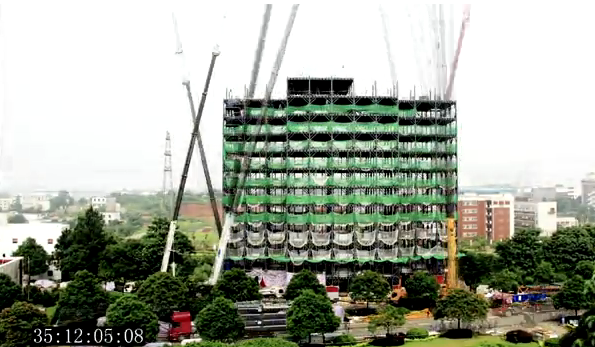 As the United States and China battle over the finer points of currency manipulation at the G-20 summit, American negotiators may want to take note of this startling testimonial to the productivity of Chinese workers: A construction crew in the south-central Chinese city of Changsha has completed a 15-story hotel in just six days. If nothing else, this remarkable achievement will stoke further complaints from American economic pundits that China’s economy is far more accomplished than ours in tending to such basics as construction.
[Related: China sets record with new supercomputer]
Meanwhile, it’s easy to imagine the disorientation of Changsha residents who’d gone away, or who just hadn’t recently ventured into the downtown neighborhood of the new Ark Hotel: “Honey, I don’t remember a hotel there, do you?”
The work crew erected the hotel — a soundproofed, thermal-insulated structure reportedly built to withstand a magnitude 9 earthquake — with all prefabricated materials. In other words, a crew of off-site factory workers built the sections, and their on-site counterparts arranged them on the foundation for the Ark project.
[Video: How safe is a home built in a week?]
Despite the frenetic pace of construction, no workers were injured — and thanks to the prefab nature of the process, the builders wasted very few construction materials. Below is a time-lapse video that shows the hotel being built from the ground up in less than a week: