WASHINGTON—The U.S. House of Representatives passed by a wide 348 to 79 margin legislation to penalize China’s foreign-exchange practices, sending a powerful signal to Beijing to change its policies but risking a backlash that could harm U.S. companies and consumers. 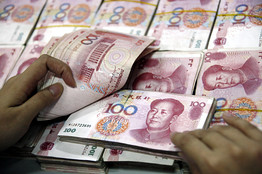 ZUMApress.comThe measure would allow, but not require, the U.S. to levy tariffs on countries that undervalue their currencies. The bipartisan support highlights lawmakers’ long-simmering frustration with Chinese trade practices as well as their sensitivity to the faltering economic recovery with elections looming. It’s the strongest trade measure aimed at China to make it through a body of Congress after more than a decade of legislative threats by U.S. lawmakers.
The Obama administration didn’t endorse the House measure, nor did it work with House negotiators out of concern for being tagged as secretly approving it. Nevertheless, the bill gives it another tool to pressure China to boost the value of its currency, the yuan.
Treasury Secretary Timothy Geithner has already tried to use the threat of Congressional action to press China to appreciate its currency. The administration also is expected to use multilateral pressure, as European and Asian countries are likely to complain about Chinese currency practices at a Washington meeting of the International Monetary Fund next week, and a Seoul summit of the leaders of the Group-of-20 industrialized and developing nations in mid November.
The administration is under election-year pressure to act. China is increasingly coming up in the campaigns of both parties, as a sort of shorthand for worrisome foreign influence. In their recently released “Pledge to America,” for example, Republicans assert that “we not borrow 41 cents of every dollar we spend, much of it from foreign countries, including China.”
Democrats are accusing Republicans of abetting outsourcing and the trade deficit. Rep. Mark Schauer (D., Mich.), a Democrat in a tough re-election race, is airing an ad against his Republican opponent that says, “Tim Walberg made it way too easy for companies to outsource our jobs to China. That’s wrong. I’m fighting to end outsourcing, and making sure we create jobs here, not China.” Mr. Walberg called the ad misleading, saying his words were taken out of context.
The moves come at a sensitive time in U.S.-China relations, with the two sides clashing over Chinese territorial claims in the South China sea and wrangling over a number of trade issues from glossy paper to tires to chicken. Thus far, the disputes have been manageable. But the relationship is clearly changing to reflect the growing economic power of China, whose fast-growing economy largely escaped unharmed from the steep global downturn.
Under the measure, the U.S. Department of Commerce would be directed to consider whether Chinese currency practices amount to an unfair subsidy in cases brought by industries competing with Beijing. If Commerce made such a determination, it could assess levies on goods imported from China or other countries with undervalued currencies.
But the measure, which was revised in a Ways and Means committee vote earlier this month, doesn’t require Commerce to make such a determination. The change in language, said Scott Lincicome, a trade lawyer at White & Case, gives the administration “a way to say no” to U.S. industries and could signal to China that the U.S. isn’t looking to declare a trade war over currency practices.
“The Chinese government has good lawyers,” said Mr. Lincicome, who has represented Chinese companies. “They’ll get good advice that the bill isn’t catastrophic. But it will stoke tensions any more than any U.S. unilateral action will have done.”
Despite the wide support the currency bill received in the House, it will be difficult for the measure to become law this year. China critics in the Senate plan to press for legislation when lawmakers return to Washington after the elections, but that would involve a separate proposal and the window for legislation to move before year-end is expected to be narrow.
If Republicans take back control of the House of Representatives in November’s elections, priorities could change. Even Republicans on the Ways and Means Committee who supported the bill said the U.S. should instead be more aggressive in pursuing international trade violations by China with the World Trade Organization, rather than taking on Beijing unilaterally.
“To those who continue to oppose this bill, I say this: This bill is not on my trade agenda,” Rep. Dave Camp (R., Mich.), currently the top GOP member of the House Ways and Means Committee, plans to say in a speech Wednesday evening, according to his prepared remarks.
Rep. Camp also plans to press for the U.S. to revive bilateral investment treaty negotiations with China. Republicans have also called for the U.S. to move quicker on new trade agreements
Even so, the heat will remain on Beijing over trade. Although Chinese officials regularly say they don’t act under the threat of pressure, that hasn’t been the case recently. In June, shortly before an earlier G-20 summit, China said it would end its two-year-old practice of tying the yuan tightly to the dollar.
When the value of the yuan barely budged, the U.S. dispatched White House economic adviser Lawrence Summers to Beijing in Sept. to warn of political consequences. Since then, the yuan has risen 1.7%. Overall, the yuan has risen about 2% since the June announcement.
“This will get China’s attention and they’ll try to preclude further steps in legislative process by letting the rate go up sufficiently to deflect attention,” said Fred Bergsten, director of the Peterson Institute for International Economics, a free-trade think tank in Washington D.C. that has taken a generally hawkish position on Chinese currency practices. Mr. Bergsten says the yuan is undervalued by roughly 20%, which he calls “the biggest protectionist measure in the world by a wide margin.”
But predicting Beijing’s reaction is always difficult. A coalition of three-dozen trade associations warned in a letter to Congress that the measure could produce a backlash by Beijing against U.S. companies. The legislation “would embolden [Chinese] retaliation and undermine U.S. government efforts to address a growing number of discriminatory Chinese policies,” the letter said.
Yuan banknotes