BEIJING—China’s government is considering plans that could force foreign auto makers to hand over cutting-edge electric-vehicle technology to Chinese companies in exchange for access to the nation’s huge market, international auto executives say. 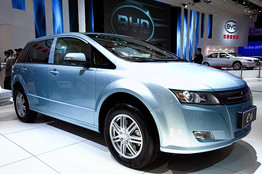 China’s Ministry of Industry and Information Technology is preparing a 10-year plan aimed at turning China into “the world’s leader” in developing and producing battery-powered cars and hybrids, according to executives at four foreign car companies who are familiar with the ministry’s proposal.

The draft suggests that the government could compel foreign auto makers that want to produce electric vehicles in China to share critical technologies by requiring the companies to enter joint ventures in which they are limited to a minority stake, the executives say.
The plan is “tantamount to China strong-arming foreign auto makers to give up battery, electric-motor, and control technology in exchange for market access,” says a senior executive at one foreign car maker. “We don’t like it.”

The car executives are joining a chorus of companies criticizing China’s industrial policies. Business people and government officials say Beijing’s so-called indigenous-innovation efforts discriminate against them and are aimed at gaining control of foreign intellectual property.
Such complaints come amid broader frustration in the U.S. and elsewhere over China’s trade and currency policies. Critics say China has kept the value of its currency artificially low, giving the country’s exporters an unfair advantage in world markets.
On Thursday, U.S. Treasury Secretary Timothy Geithner told a Congressional panel that China needs to let its currency strengthen significantly. But he attempted to dissuade lawmakers from pursuing punitive steps against China, which he said could be counterproductive.
China’s market is becoming indispensable for many companies. And multinational corporations continue to pour investment into China, which has mushroomed into a top market for everything from iron ore and cars to personal computers, beer and Bordeaux wine.

But as the Chinese market’s importance to global companies has increased in the wake of the global financial crisis, the government has sought to trade access for technology in an effort to speed the country’s industrial transformation. The U.S. Chamber of Commerce in July said China’s policies are “forcing foreign technology companies to anguish over balancing today’s profits with tomorrow’s survival.”
Top executives at chemical giant BASF AG and industrial conglomerate Siemens AG recently raised concerns about Beijing’s policies in a public meeting with Chinese Premier Wen Jiabao. Those comments followed similar complaints by General Electric Co. Chief Executive Jeffrey Immelt.
The U.S. on Wednesday filed two trade cases at the World Trade Organization, claiming discrimination by Beijing against U.S. steel makers and credit-card companies.
Beijing says concerns about the investment environment are unfounded. “China is committed to creating an open and fair environment for foreign-invested enterprises,” Mr. Wen told global business leaders at a meeting of the World Economic Forum in China this week. “Foreign-invested enterprises in China on the whole enjoy a good environment and have reaped good returns.”
China, set to surpass Japan as the world’s second-largest economy this year, is already the world’s largest vehicle market. Sales in China have become an important source of profit for many multinational car makers.
But China has yet to produce a home-grown car company that can compete on the global stage. The government sees the emergence of electric vehicles as a chance to put its auto industry into the world’s top tier.
The government’s electric-vehicle plan is aimed at building three to five Chinese companies into globally competitive makers of all-electric cars or plug-in hybrids by 2020. It also would promote the growth of two to three global suppliers of key components, such as advanced battery and electric-motor technologies.
The plan calls for investment of as much as 100 billion yuan, or about $15 billion, in areas such as charging stations and other infrastructure, two of the foreign auto executives say. It isn’t clear how much of that would be corporate investment and how much would come from the government. 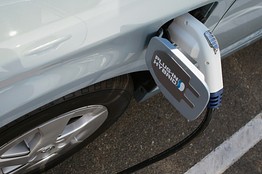 Getty ImagesA power cable from a vehicle charging station is seen plugged into the side of a Toyota Prius plug-in hybrid in San Francisco.

One foreign auto executive said the Industry Ministry’s draft “unnecessarily raises the hurdle for our plans for producing an electric car in China.” Since China is likely to be a major market for electric cars and plug-in hybrids by 2020, multinational car companies will need to manufacture such vehicles in China, he says. “But the new pending policy would make the process unnecessarily more cumbersome and complicated.”

Toyota has postponed the rollout of the latest version of its Prius hybrid—which has been on sale in Japan and the U.S. since 2009—in China until the government’s policies become clearer, people close to Toyota said.
The technology-transfer provisions could be changed or scaled back before the plan is finalized. The Industry Ministry recently distributed the draft to other government agencies and to state-owned auto makers to seek their opinions. If there is no major opposition, the plan could be implemented as soon as next month, according to the executives, although they expect it will likely take longer.

Wang Lijian, director of the ministry’s news office, said industrial-policy makers at the ministry responsible for the draft weren’t available for comment.
In coming decades, “China is going to go from following the industry to leading the industry in automotive technology,” said Zhang Baolin, president of Chang’an Automobile Co., a state-owned enterprise in Chongqing. “There will be lots of opportunities for us in the new-energy automotive field.”
The Industry Ministry projects that China will have five million electric cars and plug-in hybrids on the roads by 2020, and Chinese auto makers will have the capacity to produce and sell three million gas-electric hybrids a year in China.

Under the ministry’s proposed plan, foreign auto makers must form joint ventures with Chinese companies if the foreigners decide to produce key new-energy components, such as advanced lithium-ion batteries and high-power electric motors, in China. Given the size of China’s market and the costs involved in importing those components, most foreign companies that make electric vehicles would feel it necessary to produce those components in China.
The plan would cap foreign ownership in the ventures at 49%, giving majority ownership and effective control to the Chinese partners, the foreign executives say. Foreign companies now are allowed in most cases 50% ownership of ventures that make gasoline-powered cars.
“We need to make sure we have a contract or agreement that allows us to continue to own and control the technology, even though we might be a minority stakeholder,” said one of the foreign auto executives.
—Sue Feng contributed to this article.
Write to Norihiko Shirouzu at norihiko.shirouzu@wsj.com