A record number of federal dollars went to small businesses in 2009, although the federal government once again fell short of reaching its annual goal, according to a report from the Small Business Administration.
Nearly $97 billion or 21.9% of prime federal contracts went to small firms between Oct. 1, 2008 and Sept. 30, 2009. That’s up from the $93 billion that small businesses landed a year earlier, but still about $5 billion short of the 23% target established in a 1997 law. 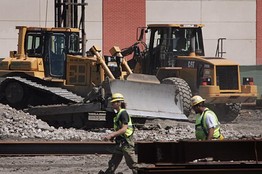 See a complete list of government agencies and the grades they received for awarding small-business contracts.

“I think the goal is feasible for next year,” said Joe Jordan, the SBA’s associate administrator for government contracting and business development. The government has missed its target in recent years in part because some contracts, such as those for weapons systems or massive construction projects, are more suited to larger firms, he said.
The SBA’s fourth annual scorecard, issued Friday, evaluated 24 federal agencies on contracts awarded to small companies. For the first time, the agency used a letter-grade system in an effort to bring more transparency to the data. (See a complete list of agencies and their grades.)
Sixteen agencies received letter grades of A or B, meaning that they almost met or exceeded their goals for the year.
For example, the Department of Education got an A for surpassing its target of 12.8%, hitting 16.4%, or $244 million. The Social Security Administration received a B for nearly reaching its goal of 32.53%, with 32.47%, or $403 million.
The goals were negotiated by each agency and the SBA, and were based on both past performance and the number of feasible procurement opportunities available to small businesses.
Four of the agencies received a grade of D or F, including the Department of Justice, which awarded $1.9 billion or 24.5% of its prime contracts to small businesses, far from its 36.8% goal. The Office of Personnel Management awarded $224 million, or 14%, which was less than half of its goal, and received an F.
The SBA has previously been criticized by watchdog groups and the U.S. Government Accountability Office for failing to accurately track procured contracts, and for allowing large firms and fake companies to receive small-business contracts. The SBA says it has boosted efforts in the last year to remove fraud and errors in the procurement system, Mr. Jordan said.
Still, organizations such as the American Small Business League, which issued its own report on fiscal 2009 contract recipients, maintain that many government-hired firms claiming to be small are actually large businesses.
“Generally speaking, we are finding fraud and abuse at the same rate,” said Christopher Gunn, ASBL’s communications director.
The SBA says it plans to do more to make federal dollars available to small businesses, including “unbundling” or separating big-business contracts into separate contracts.
A number of agencies that received low grades say many of their prime contracts are better handled by larger companies, and that the SBA’s grading system should take subcontracts – which often go to small companies – into greater account.
One boost for small businesses has been the stimulus contracts that began rolling out in early 2009 as part of the $787 billion Recovery Act. Although stimulus jobs amount to only a small portion of overall government work, they are often modest in size and well-suited for small firms. Through early last month, small businesses have landed 32% of stimulus contracts, according to preliminary data.
The SBA’s scorecard indicates that the government, while showing improvement over 2008, is still not meetings its targets for women-owned or service-disabled veteran-owned companies, or for small businesses located in historically underutilized business zones or HUBZones. Federal agencies did meet their goals in awarding contracts to small “disadvantaged” businesses, a category that is based on the owner’s socioeconomic background.
For stimulus contracts, however, the government is meeting or exceeding its goals in all subcategories, Mr. Jordan said.
Write to Emily Maltby at emily.maltby@wsj.com