By IAN TALLEY And DARRELL A. HUGHES

The drop in exports and rise in imports exacerbated a widening trade deficit. 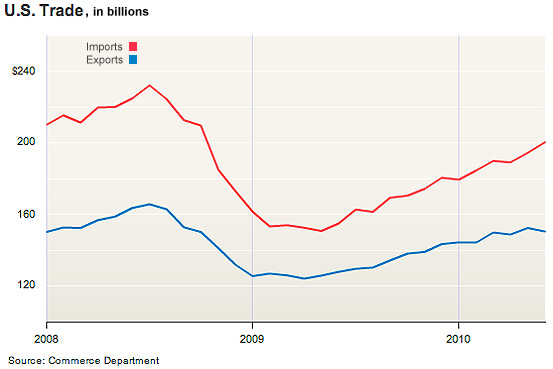 The U.S. trade deficit widened to near a two-year high in June, as imports from its largest trading partners ballooned.
The shortfall in international trade of goods and services surged 19% to $49.90 billion, the Commerce Department said Wednesday.
The deficit is much larger than the Commerce Department had calculated in its initial second-quarter growth estimate, and the figures are likely to weigh in a downward revision of U.S. gross domestic product growth during the period.
Economists surveyed by Dow Jones Newswires had expected the deficit to expand to $42.7 billion in June. The deficit in May was revised down to $41.98 billion from an initial estimate of $42.27 billion.

The U.S. trade gap with China expanded to $26.15 billion in June, the widest level since October 2008 and a 17% gain on the previous month’s bilateral deficit of $22.28 billion. Imports expanded $3.83 billion, while exports slowed by $38 million. Earlier this week, China’s trade surplus ballooned far above market expectations, hitting $28.7 billion as exports grew faster than imports.
The figures are likely to continue to give ammunition to federal lawmakers pressuring the Obama administration to take China to task on its currency policy. Although China earlier this year announced a move to a more flexible exchange rate, lawmakers say the yuan is still artificially low, undermining U.S. competitiveness. Legislators are threatening to pass retaliatory laws that would penalize imports from countries that are deemed to be manipulating their currency.
In trade with other large partners, the U.S. registered an expanding deficit with Mexico at $6.21 billion while the deficit with the European Union ballooned by 26% to $7.76 billion. The deficit with Japan surged 45% to $5.25 billion while with Canada, it grew to $2.58 billion, up $320 million from the previous month.
Trade had been one of the pillars of support to the economy during the recent recession but has weighed on recovery growth.
The real, or inflation-adjusted deficit, which economists use to measure the impact of trade on GDP, climbed to $54.14 billion in June from $45.99 billion the month before, Commerce said.
“This is spectacularly terrible,” said Ian Shepherdson, chief U.S. economist for High Frequency Economics. He expected the inflated deficit to shave up to half a percentage point off growth.
Joshua Shapiro, chief U.S. economist for MFR, said that the trade data, combined with the expected revisions to inventories and nonresidential construction, could push estimates of second-quarter real GDP growth down to 1%, compared with initial estimates of 2.4%.
U.S. exports contracted 1.3% to $150.45 billion, from $152.44 billion in May. Imports increased at a faster rate, expanding 3.1% to $200.35 billion from $194.42 billion.
Imports of consumer-goods imports increased 7.8%, driven by pharmaceuticals and household goods, auto imports were up 6.6% and capital goods rose 1.2%.
The U.S. bill for crude oil imports in June rose to $22.60 billion from $21.54 billion the month before, as volumes surged nearly 32 million barrels to 311.93 million barrels. The average price for oil fell nearly 6%, or $4.49 a barrel, to $72.44 a barrel.

“ The scariest number is the drop in exports. The nascent recovery in manufacturing was heavily predicated on exports sales. Say goodbye to that hope. Now it will be inventory building and government spending. ”

The U.S. paid $28.02 billion for all types of energy-related imports, up from $27.60 billion in May.
Imports of foreign-made consumer goods like pharmaceuticals, toys and apparel surged $3.1 billion. Auto and related parts imports jumped $1.29 billion, while purchases of foreign-made capital goods such as computers rose $462 million. Food and feed imports increased $33 million.
Imports of industrial supplies decreased $186 million in June, however, amid declines in fuel oil and other petroleum products.
Breaking down exports, U.S. sales abroad of capital goods fell $1.43 billion, with declines across most products. Exports of industrial supplies, such as fuel oil, decreased $1.01 billion. Consumer goods exports increased marginally by $123 million in June, while auto exports grew by $233 million.
Meanwhile, exports of food, feed, and beverages went down by $310 million.