BEIJING—Mounting questions about abnormal hormone levels in several Chinese infants who demonstrated early signs of puberty have prompted a Chinese milk supplier and New Zealand dairy giant Fonterra Cooperative Group Ltd. to defend their products.
The issue comes two years after the 2008 milk scandal, in which at least six children died and 300,000 were sickened from milk that contained dangerous levels of melamine, an industrial chemical. 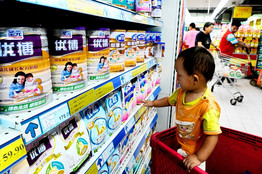 Agence France-Presse/Getty ImagesTins of milk powder made by Synutra on sale at a supermarket in Beijing on August 9, 2010, after parents and doctors expressed fears that hormones in Synutra had caused babies to develop breasts prematurely.

The Chinese company at the center of the latest questions, Nasdaq-listed Synutra International Inc., insists it isn’t to blame for symptoms of sexual prematurity in babies, including breast growth. On Synutra’s website, it says the company has never added illegal hormones to its milk products, and questions links between its product and the babies’ signs of puberty.
“These claims are highly irresponsible and based on speculation instead of scientific evidence,” said the company’s chairman and chief executive, Liang Zhang. “As a well-known and trusted provider of infant formula in China, we are completely confident that our products are safe and our quality levels are industry leading.”
Earlier this month, parents and doctors in central China’s Hubei province began voicing concern that milk powder from Synutra had caused at least three infant girls to exhibit signs of puberty, the state-run Xinhua news agency reported. Earlier this week, officials from the Ministry of Health said they were launching an investigation into the milk powder.
At a news conference on Tuesday, a spokesman for China’s Ministry of Health said multiple factors could cause sexual prematurity, and experts couldn’t yet determine whether food was a factor, Xinhua reported.
In 2008, Fonterra, one of New Zealand’s largest companies, faced a wave of criticism in the aftermath of the milk scandal. Fonterra owned a large stake in one of the companies at the center of the scandal, the now-defunct Sanlu Group, but has flourished in China following Sanlu’s closing. Synutra recalled some of its products during the melamine scare.
Synutra has said it has been using milk powder imported from Europe and New Zealand.
Both Fonterra, which supplies milk powder to Synutra, and New Zealand authorities issued statements Wednesday.
“In New Zealand there are strict legislative controls on the use of hormonal growth promotants,” said the New Zealand Food Safety Authority. “NZFSA is seeking clarification about the media reports from China.”
Fonterra said the country’s strict controls mean the routine testing for hormones is unnecessary. “Fonterra remains 100% confident about the quality of its product,” it said.
Along with receiving supplies from Fonterra, Synutra contracts with local Chinese suppliers and dairy companies in Europe. On Monday, the company’s Nasdaq-listed stock tumbled 27% following reports of the infants’ puberty symptoMs in local media. On Wednesday afternoon, the shares were up two cents each at $13.02, but are down 48% from their 52-week high reached in May.