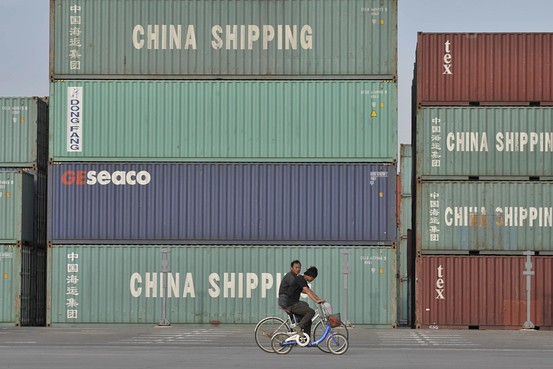 BEIJING—China’s trade surplus is set to balloon again unless the government takes more steps to support domestic consumption, including letting its currency strengthen, the International Monetary Fund warned in its annual review of the nation’s economy.
The assessment by the IMF staff, published Thursday, reflects the growing concern among some economists and officials that a shift toward a more sustainable pattern of global economic growth could be stalling as the worst of the crisis recedes and countries return to business as usual. Some of the report’s conclusions—including its contention that China’s currency is “substantially” undervalued—were disclosed by the IMF earlier this week.
The fact that the report, known as an Article IV review, was released at all still marks an improvement in the sometimes-testy relationship between China and the fund. China had blocked publication of last year’s review, which was only completed after the IMF backed away from calling China’s currency “fundamentally misaligned.”

Yet the debate over currency policy is only part of the discussion over the broad direction of the Chinese economy, which both the IMF and China’s government agree still depends too much on exports. Supporting domestic consumption instead “will reduce China’s reliance on external demand and better insulate the economy from shocks in overseas markets,” the IMF said.

China gave domestic demand an enormous boost with its stimulus program to combat the effects of the financial crisis, resulting in a surge in imports of raw materials and equipment to feed a construction boom. As a result, China’s current account surplus—the broadest measure of its trade balance—fell sharply, reaching 4.5% of gross domestic product in the first quarter of this year, less than half the peak level of nearly 11% of GDP in 2007.
For China to ensure that its trade surplus continues to decline will be “an exceptionally complicated exercise in macroeconomic engineering” that “will require concerted action on multiple fronts,” the IMF said. Although China has taken some steps in the right direction, including the recent loosening of its currency’s link to the U.S. dollar, the IMF said, “The critical mass of policy reforms that will be needed to realize this goal is not yet fully in place.”
Achieving a shift toward lower trade surpluses in nations like China, and smaller trade deficits in nations like the U.S., should help global economic growth to be faster and more broad-based, the leaders of the Group of 20 major economies agreed at their summit meeting last month.
But with China’s government now gradually phasing out its stimulus program, and economies in the rest of the world getting closer to normal, the factors that drove the trade surplus down are in danger of being exhausted, the IMF report said. Earlier this month, the U.S. Treasury made a similar argument, warning that “China’s trade surplus is likely to rise again as the rest of the world recovers.”
The IMF noted that China’s government disagreed with its assessment, arguing that continued fast growth, rising wages and already-implemented reforms will ensure that the current-account surplus keeps falling, to about 4% of GDP over the next few years.
The IMF urged China to press ahead with measures such as allowing higher and more market-driven interest rates; reducing taxes to encourage consumption; improving healthcare coverage; accelerating urbanization by reducing restrictions on migration; and raising low, government-set prices of energy and raw materials.
China also needs to adjust its currency, the IMF said, which despite official promises of greater flexibility has so far moved very little. “The current undervaluation is counterproductive and acts as a headwind to increasing private consumption,” the report said. “A stronger currency will help increase the purchasing power of households, raise the labor share of income, and reorient investment toward those sectors that serve the domestic market.”
China has contested that analysis, and the report notes the Chinese government believes the currency’s value is now “much closer to equilibrium than at any time before.”
The IMF’s focus on medium-term structural issues reflects its view that the Chinese economy’s recovery is now solidly established, with little danger of high inflation. The fund expects China’s headline inflation rate to fall in the second half of this year and hover around 2% to 3% annually in coming years.
The IMF noted that China worries that efforts to cut budget deficits in Europe, the U.S. and Japan could weaken global growth, while China itself has room for more stimulus if needed. However, it said that after the lending binge that resulted from the previous stimulus plan, China also needs to deal with risks to the banking sector as well as continued risks of a bubble in the real-estate market.
Write to Andrew Batson at andrew.batson@wsj.com