By JONATHAN WEISMAN And NAFTALI BENDAVID

The White House is intensifying its attacks on Republicans, after Democratic leaders on Capitol Hill publicly criticized the administration for not doing more to help them retain their majorities.
In his Saturday radio address, President Barack Obama accused “a partisan minority in the Senate” of blocking legislation aimed at helping small businesses and the unemployed. Vice President Joe Biden, discussing November’s midterm elections on ABC’s “This Week” Sunday, declared: “We’re going to shock the heck out of everybody.”

“What I believe, what the president believes—we’re going to win the House and we’re going to win the Senate,” he said.
Those comments contrasted with those of White House press secretary Robert Gibbs last week that enough seats were in play this fall that Democrats could lose their House majority. House Speaker Nancy Pelosi (D., Calif.) and other Democrats publicly berated Mr. Gibbs for his remarks, and pressured the White House to take a more active role in trying to re-elect Democrats this November.
White House Chief of Staff Rahm Emanuel said in an interview Sunday that the shift has been ongoing for some time and wasn’t prompted by the blowup. The president will focus in the coming days on themes appealing to the economically battered electorate, he said, including policies aimed at keeping jobs in the U.S.

In coming weeks, the president will expand his push to create clean-energy jobs to include more traditional industries such as automobiles and railroads. “Made in America” will become the “big theme,” Mr. Emanuel said.
On Monday, the president will appear with unemployed workers to press the Senate to pass an extension of expired unemployment benefits. On Wednesday, he is set to hold a rally at the Ronald Reagan building in Washington, where he will sign the newly passed financial regulations bill, again featuring “real people” positively affected by the law, White House aides said. 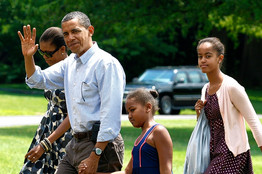 ReutersPresident Barack Obama and his family return to the White House Sunday after a weekend in Maine.

Mr. Obama will also seek Senate passage of proposals to change tax provisions that he says encourage businesses to ship jobs overseas, Mr. Gibbs said Sunday. The president will hold a big-dollar fund-raiser late this month in New York City
“You can call it tough, but there’s a clarity of choice there,” Mr. Emanuel said. “One party wants to go forward and tackle these problems. One wants to repeal and repeat the problems of the past.”
Republican aides said voters have already turned against the president’s health-care and economic-stimulus plans, and the just-passed financial regulatory bill is unlikely to change any opinions. They said Republicans also supported extending expired unemployment benefits but they want to pay for it with budget cut elsewhere.
“The increasingly harsh partisan rhetoric from the Obama White House makes clear they are not only very nervous about the upcoming election, but it’s a recognition that they can’t run and win on their own agenda,” said Brian Walsh, spokesman for the National Republican Senatorial Committee.
Republicans still hold the whip hand, with the unemployment rate at 9.5%, surging government debt, disheartened Democratic voters and energized conservatives.
Appearing on NBC’s “Meet The Press” Sunday, the heads of the Democratic congressional campaign committees, Sen. Robert Menendez of New Jersey and Rep. Chris Van Hollen of Maryland, pressed Republicans to say what policies a GOP majority in Congress would push.
Their Republican counterparts, Sen. John Cornyn and Rep. Pete Sessions, both of Texas, didn’t offer specifics. Mr. Sessions said Republicans would balance the budget and “empower the free-enterprise system.” Mr. Cornyn said they would replace the health-care law with “commonsense health-care reform.”
The two focused on the Democrats’ record under Mr. Obama. “To all the bad ideas [voters] hear coming out of Washington today, ‘no’ is a good start,” Mr. Cornyn said.
Republicans have jumped on what Mr. Boehner called “a full-scale civil war” between the White House and Congress. They depicted Democrats as in disarray, even as Democrats approved the most far-reaching overhaul of financial regulations since the Depression.
The White House is moving to repair the breech. “There’s an awful lot of shared anxiety and it feeds on itself,” White House adviser David Axelrod said in an interview.
Some House Democrats have speculated privately that Mr. Obama wouldn’t mind if Republicans took over the House, since a GOP Congress could help his re-election prospects.
“I wanted to put an end to a growing rumor that the president doesn’t want the House, only the Senate, and feels he can get more done with a split Congress,” Rep. Bill Pascrell (D., N.J.) said, explaining his criticism last week of the White House. “I don’t believe that’s true for a moment, and I thought it should be brought to a head.”
Mr. Van Hollen on Sunday said the November elections would be interpreted as a referendum on the president, “whether they like it or not.”
Anxiety is running particularly strong in the House, where the Democratic majority is more endangered and many House members feel mistreated by the Senate. House Democrats have passed a series of bills on energy and joblessness, including extending now-expired unemployment benefits, only to see them stymied in the Senate.
“There is a sense that we’ve been doing everything we can to pass the White House’s agenda, but then the White House doesn’t provide the muscle to close the deal in the Senate,” said a House leadership aide.
Relations between the White House and Democrats appear to be on the mend. Mr. Biden said Democrats are changing the course of the election by drawing contrasts with their Republican rivals.
“I don’t think the losses are going to be bad at all,” he said.
—Laura Meckler contributed
to this article.
Write to Jonathan Weisman at jonathan.weisman@wsj.com and Naftali Bendavid atnaftali.bendavid@wsj.com

0 thoughts on “Rahm Emanuel says the President’s big theme will be “Made in America.”