A showdown between credit unions and banks could have serious implications for small-business lending. 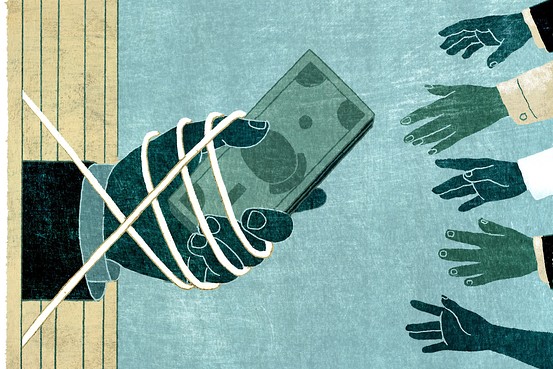 Credit-union lobbying groups in Washington are pushing for legislation that would lift a 12-year-old law that curtails credit-union lending to 12.25% of total assets. Raising the cap to 25% and easing other restrictions would allow credit unions—important sources of financing for many small operations—to extend up to $10 billion in additional business loans in the first year the cap is lifted, according to the Credit Union National Association in Washington.
The proposed legislation, however, faces stiff opposition from banking lobbying groups, which argue that an increased cap would create a distorted competitive environment detrimental to community banks, also big lenders to small businesses.
“It’s a test of political wills,” says Dan Mica, chief executive of the Credit Union National Association.
The National Credit Union Administration, a federal regulation agency, says that as of March, its members had $35.6 billion in outstanding loans to businesses, the vast majority of which were small firms. The Federal Deposit Insurance Corp., the counterpart agency for banks, reported last June that its members had $696 billion outstanding business loans for amounts less than $1 million.
Established over a century ago to serve individuals of modest means, credit unions are member-based organizations, meaning the consumers they serve generally fit a common criterion, such as occupation, region of residence or faith. Members pay a small fee to join, which allows them to hold an equal share in the organization.
But a point of contention for banks is that credit unions are nonprofit lending organizations that enjoy a tax-free status. Congress imposed the cap in 1998 to ensure that credit unions maintain prudent lending practices.
According to government lending reports, loans to small businesses rose at credit unions but dropped at community banks in 2009, which bank advocacy groups say is cause for concern.
“Credit unions are being more aggressive in their lending,” says Ed Yingling, president of the American Bankers Association, a Washington-based lobbying group. “It raises questions about safety and soundness,” he adds, saying that “Congress should drill down there before they willy-nilly increase the cap.”
CUNA points to low default rates in its constituency’s small-business loan portfolios as evidence that credit unions know how to make careful loans. But each side has accused the other of being too lax when underwriting business loans and having to subsequently receive government funds.
Small-business owners who have been turned down by banks seem supportive of the raised cap. Suzanne Hermann, owner of the Bagel Factory in San Antonio, Texas, says she got a loan for several hundred thousand dollars from Randolph Brooks Federal Credit Union after being rejected by multiple banks that had worked with her in the past. Some of them had helped her finance previously successful businesses, she says.
“Several told me that if I got it up and going, that I should come back if I wanted to open a second location and that they’d be happy to entertain a loan then,” Ms. Hermann recalls of her recent loan search.
Ms. Hermann says her application process with the credit union took about a month and the store opened last November. She just hired her thirteenth employee and is planning to open small satellite locations to sell her baked goods around the city.
Matthew Rembe’s family business, Los Poblanos Inn and Cultural Center in Albuquerque, N.M., got a loan from a credit union last December after nearly a year of being rejected by banks, he says.
With his loan for over $3 million from Sandia Laboratory Federal Credit Union, he plans to add 15 guest rooms, expand the dining room, and add amenities such as a pool and fitness room, among other things.
“There was major due diligence,” says Mr. Rembe of the application process. “In the past we’d gotten easy money, so it was not what we were used to at that point.”
But bank organizations say that even with proper oversight, giving credit unions more liberties to lend will have a detrimental impact on for-profit lenders, particularly the community lenders that serve neighboring businesses. ABA and the Independent Community Bankers of America, an advocacy group for small banks, say the few credit unions that are nearing the cap are making large business loans that are outside of the credit unions’ chartered mission and that should not be tax exempt.
According to CUNA, 360 credit unions out of the 2,158 that engage in business lending have surpassed 7.5% in their lending to asset ratio and are on track to hit the 12.25% ceiling.
“For some individual businesses, they will get a tax subsidized loan and in their narrow perspective that will be beneficial,” says the ABA’s Mr. Yingling. But, he says, with such a massive federal deficit, tax-exempt loan activity that will benefit a few businesses will be unhealthy for taxpayers as a whole.
Write to Emily Maltby at emily.maltby@wsj.com