Ford Motor Co. said it plans to make more of the components for its hybrid and electric vehicles in the U.S. as part of an effort to increase the number of low- or zero-emission models it offers over the next few years.
The $135 million move, which will add 170 assembly jobs in Michigan, is a bit of good news for a state that was hit hard by the auto industry’s deep downturn, though some of the new Ford workers may make substantially less than existing hourly employees under the terms of a 2007 United Auto Workers concession.
Ford also plans to add 50 engineers to expand its offerings of fully electric and hybrid gas-electric vehicles. By 2020, the auto maker expects that 10% to 25% of its global model lineup will be composed of such models.

Bloomberg NewsThe dash of a Ford Fusion hybrid at the Detroit car show in January. Ford plans to expand its hybrid line. 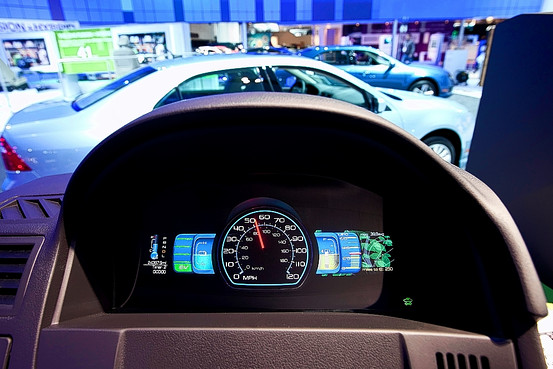 But according to some estimates, the growth in the market for fully electric cars and trucks could be slow-going. A study earlier this year by Deloitte Consulting found that the relatively high cost and limited driving range of electrified vehicles means they will make up no more than 5% of the U.S. market by 2020.
Under Ford’s new strategy, assembly of the battery packs used in hybrid and electric models will be moved to Michigan from a supplier in Mexico, while production of electric-drive transaxles will shift to another Ford plant outside Detroit from a supplier in Japan.
Ford engineers in Dearborn, Mich., will design the battery packs while engineers in Livonia, Mich., will design electric-drive transmission parts for its next-generation hybrids. Those vehicles will be based on Ford’s midsized and large sedans and will begin production in North America in 2012, the company said.
Ford is hiring more engineers in Dearborn to improve its knowledge of electrified vehicles. The advanced battery research group now has 14 members and the company expects to bolster it by six additional people by the end of the year.
For now, the batteries themselves will continue to be made abroad. Ford imports batteries from Japan for use in its Ford Escape sport-utility vehicle, which it assembles in Kansas City, Mo., and for its Ford Fusion and Mercury Milan hybrids, two sedans built in Mexico. Ford has said it plans to make the fully battery-electric version of the Ford Focus compact, due out next year, at its Wayne, Mich., assembly plant.
Ford received a $62.7 million grant from the U.S. Department of Energy for hybrid and electric vehicle engineering and production as well as tax breaks from state and local governments.
Ford’s strategy calls for five fully electric or gas-electric hybrid vehicles for the U.S. by 2012, up from its current three. The company plans to make the new vehicles under existing model names instead of creating specialized vehicles such as Toyota Motor Corp.’s Prius hybrid or the coming extended-range electric Chevrolet Volt from General Motors Co. and fully electric Leaf from Nissan Motor Co.
In 2009, sales of all Ford hybrid vehicles totaled 33,502, up 72% over 2008 and a new calendar year record for the company. In comparison, Toyota sold 139,682 Prius hybrids in the U.S. last year, though that figure was down 12% from 2008.
The hiring news at Ford comes on the heels of an announcement Friday by Chrysler Group LLC that it plans to add 1,100 workers to the 1,700 who workat its Jeep plant in Detroit. The hires will start at $14 an hour, about half of the traditional union wage.
Mark Fields, Ford’s president of the Americas, confirmed Monday the company likely will hire similarly paid workers this year. But it first must make job offers to about 450 Ford workers who have been idled, he said.
Write to Matthew Dolan at matthew.dolan@wsj.com