Small-business owners that depend on China for manufacturing, cheaper raw materials and inexpensive labor are bracing for the potential revaluation of China’s currency.
Beaumaris Networks Inc., a software company in Boxborough, Mass., that has a research and development office in Beijing, is used to paying three engineers in China roughly the same salary just one engineer would make in the U.S.

Ce Ce Chin IncorporatedCe Ce Chin, right, discusses shoe designs with her development team in Houjie, China, in April. Ms. Chin says she will try to trim costs and not raise prices if the yuan rises. 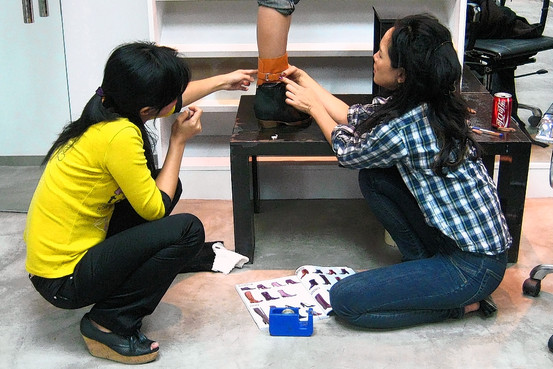 “We tried to factor in inflation and now we need to add another element—currency exposure—into our business plan,” says Beaumaris’s finance chief, Scott Bryce.
The year-old company, funded by venture capitalists, has also enjoyed low-cost rent at its China facility and said it would have to make cutbacks to compensate. “Because we only have finite resources from our VCs, that’s a direct hit to our bottom line,” says Mr. Bryce.
It’s unclear when China will allow the yuan to rise against the dollar. In a meeting Monday with Obama administration officials, Chinese President Hu Jintao agreed to push for gradual reform of the yuan when his country deems it appropriate. The topic is expected to be discussed at a Group 20 meeting early next month.
If revaluation happens, some business owners—especially those who have started businesses in the past two years—will be dealing with fluctuating prices in China for the first time. Five years ago, China unhooked the yuan from its pegged exchange rate with the U.S. dollar and adopted a floating rate with a basket of currencies. Between 2005 and 2008, the yuan advanced 21% against the greenback, and many small companies that had been accustomed to paying China’s low rates adjusted their business models by raising prices, cutting overhead and moving to countries with a wider currency gap.
In July 2008, as the U.S. and other countries were teetering toward financial turmoil, China put a stop to the yuan’s rising trend and held the exchange rate at 6.83. Since then, many U.S. business owners have focused on overall economic uncertainty and stopped worrying about how the rising currency would affect their margins.
With revaluation a strong possibility, small-business owners—particularly those who have come to rely on lower costs overseas—need to contemplate a new reality. “Businesses need to do a sensitivity analysis to know the impact on the organization if the currency moves 1%, 5%, or 20%,” says Wolfgang Koester, chief executive of Fireapps, the foreign-exchange exposure division of risk-management firm Rim Tec, Inc. in Scottsdale, Ariz.
A yuan revaluation isn’t a problem for all small companies that conduct business transactions in China. The change is likely to be a boon for U.S. exporters, such as apparel company David & Goliath Inc. in Clearwater, Fla. The firm, which makes all its clothing domestically, has stores in 15 locations world-wide, including two in Asia. That means an appreciating yuan will lower the cost of the clothing for consumers paying in yuan. While none of the company’s own stores are located in China, the company does get about 300 online orders a year from Chinese consumers and has a number of retail partners in China, says Billy Blu Campisciano, vice president of consumer products. “The ups and downs are always parallel to where the currency is. So our Asian business will probably increase,” he says.
Estimates vary as to exactly how undervalued the yuan is. It’s unlikely any significant revaluation will happen overnight. In 2005, when the currency was unpegged from the dollar, it appreciated 2% against the dollar immediately and then continued on a more-gradual ascent over the next few years.
The revaluation isn’t likely to be as aggressive this time. But an appreciation could sneak up and catch an established business model off guard.
“People have been aware of the dollar-yuan rate, but the vast majority have not done much about it,” says Mr. Koester. “They have different priorities because it’s not happening yet and people tend to be reactive to these events.”
Ce Ce Chin, who owns a line of women’s shoes called 80%20 (pronounced “eighty twenty”) in New York, produces her footwear in the city of Houjie in southeast China. When she started the company five years ago, the yuan was just appreciating—something that didn’t affect her business greatly because she was still figuring out prices and negotiating with manufacturers.
Now that she has a steady manufacturing partner, the revaluation will be on her radar. Ms. Chin’s shoes and boots retail between $55 and $200, and passing extra costs along to consumers will be difficult. Ms. Chin says she plans to trim costs elsewhere, such as in shipping, if the yuan rises.
American shoppers will only pay “what they are used to paying,” she says.
Write to Emily Maltby at emily.maltby@wsj.com