By STEPHEN POWER And IAN TALLEY

WASHINGTON—The Obama administration will propose allowing offshore oil and natural-gas exploration and development in a large swath of the eastern Gulf of Mexico, after months of criticism from Republicans who have made expanded offshore drilling a political rallying cry.
In addition, the administration plans to announce new steps to determine how much oil and natural gas is buried off the coasts of Middle and Southern Atlantic states, where oil-reserve estimates are decades out of date.
At the same time, Mr. Obama’s plan wouldn’t allow new oil and gas development off the coasts of Northern Atlantic states or California, whose political leaders have long opposed offshore drilling. The administration will call off a plan drafted by the administration of former President George W. Bush that would have given oil companies access to Alaska’s Bristol Bay, an area teeming with wild sockeye salmon and many commercial fishing interests concerned about the impact of drilling on their livelihoods. 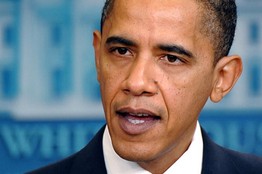 Getty ImagesThe Obama administration will propose allowing offshore oil and natural-gas exploration and development in a large swath of the eastern Gulf of Mexico.

The administration’s plan generally covers the period from 2012 to 2017, but it also modifies an existing five-year plan which expires in 2012.

To open up the eastern Gulf, Mr. Obama needs to get Congress’s permission. It will take several months to begin studying how much oil exists off the Atlantic coasts.
The idea of expanding offshore drilling is taking on increased importance in the broader debate over climate and energy legislation. The Obama administration and congressional Democrats are working with Sen. Lindsey Graham (R., S.C.) to draft legislation aimed at reducing U.S. emissions of heat-trapping gases linked to climate change. With at least several Senate Democrats expected to oppose such legislation, Mr. Obama needs Republican votes to pass it. Mr. Graham has said such a bill would have to include an expansion of offshore drilling.
Expanding drilling was a rallying cry for Republicans during the 2008 presidential campaign. Mr. Obama has said he is open to expanding offshore drilling on certain conditions. But his Interior secretary, Ken Salazar, extended by 180 days the deadline for public comment on a proposal issued under the Bush administration that would allow energy companies to drill for oil and natural gas in half a dozen areas off U.S. shores that had previously been off limits.
Mr. Salazar has spent much of the past year weighing public comments on the proposal, as well as a ruling by the U.S. Court of Appeals for the District of Columbia Circuit that found the Bush administration failed to conduct required environmental analyses of the impact of offshore drilling.
Environmental groups and many Democrats from coastal states have opposed expanded offshore drilling, citing the environmental risks associated with spills.
“We cannot support legislation that will mitigate one risk only to put our coasts at greater peril from another source,” 10 coastal state Democratic senators said in a letter last week to Sen. Graham and Sens. John Kerry (D., Mass.) and Joe Lieberman (I., Conn.), who are collaborating with him.
The area of the Gulf of Mexico that Mr. Obama will propose opening to development covers about 24 million acres and is located about 125 miles off Florida’s western coast, a person familiar with the plan said.
Mr. Obama is unveiling his plan at a delicate time for oil and gas companies. Shut out of resource-rich parts of the world like the Middle East and Russia, many oil majors increasingly view the deep waters off the southern U.S. as a key source of exploration success and production growth. Exploration in the Gulf of Mexico is expensive, compared with other basins, but high production rates and proximity to U.S. markets have made drilling there cost-effective.
The industry is eager for access to the eastern Gulf because it is one of the surer bets for relatively easy, cheap-to-produce oil and gas. A quarter of current U.S. oil production each year—close to half a billion barrels—comes out of the central and western Gulf of Mexico, where drilling is allowed. Much of the roughly 3.5 billion barrels of economically recoverable oil believed to reside in the eastern Gulf is in relatively shallow water that is readily accessible using current drilling technology.
“We’re eagerly awaiting this decision and wondering what the president is going to say,” a spokeswoman for the American Petroleum Institute said.
Write to Stephen Power at stephen.power@wsj.com and Ian Talley at ian.talley@dowjones.com