Republicans Vote for $15 Billion Measure in Rare Moment of Bipartisanship

Scott Brown, Massachusetts’ newly-elected senator, voted with four other Republicans to pass a jobs creation package. Is it the beginning of bipartisanship? Jerry Seib joins the News Hub panel to discuss.

The measure, which includes tax breaks for businesses hiring unemployed workers, moved ahead on a 62-30 vote, with Sen. Ben Nelson (D., Neb.) voting against it. The Senate is expected to vote on final passage of the bill within days.
Polls show the public deeply concerned about the economy and a stubbornly high unemployment rate. President Barack Obama has said job creation is a top goal of the administration. But while few senators took issue with the jobs package forwarded Monday, several Republicans said they were unhappy that Majority Leader Harry Reid had blocked a larger $85 billion program.
The centerpiece of Monday’s bill was a provision that frees any company hiring an unemployed worker from paying the worker’s 6.2% Social Security payroll tax in 2010. If the company keeps the new hire for a year, it would receive a $1,000 tax credit.
The bill also would allow businesses to write off the depreciation of new equipment more quickly. It would extend authorization for highway and transit construction funding. And it would help state and local governments issue construction bonds.
Republicans were angry that Mr. Reid set aside provisions that would have extended other tax breaks, including a tax credit for research-and-development spending. The bill also excludes an extension of unemployment-insurance benefits and Cobra health programs.
“This vote was not about jobs. I wish it were,” Sen. Orrin Hatch (R., Utah.) said. “Two weeks ago, the majority leader decided to pull the rug out from under a common-sense bipartisan bill only hours after it was introduced…and then quickly made sure that Republicans had no input into the measure.”
Democrats said they planned to address these items in separate legislation and that they wanted the slimmed-down bill advanced Monday to focus on job creation. 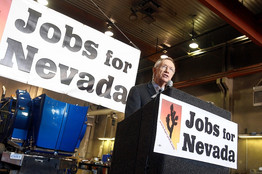 “This Senate jobs bill is not perfect,” said Mr. Brown, whose election victory in Massachusetts last month put an end to the Democrats ability to mount a 60-vote majority in the Senate, the number of votes needed to overcome filibusters. “I wish the tax cuts were deeper and broader, but I voted for it because it contains measures that will help put people back to work.”
Mr. Brown was joined in voting yes by fellow Republican Sens. Olympia Snowe and Susan Collins of Maine, George Voinovich of Ohio and Christopher Bond of Missouri.
Democrats suggested the vote could open the door for a period of greater bipartisanship. “It’s really a new day,” said Mr. Reid of Nevada.
The vote represented a successful gamble by Mr. Reid. Earlier this month, Sens. Max Baucus (D., Mont.) and Charles Grassley (R., Iowa) proposed an $85 billion jobs bill that had bipartisan support. But some Democrats complained that the legislation was loaded with extraneous provisions designed to win Republican votes.
So Mr. Reid offered his stripped down version, hoping some Republicans would come around, especially with voters so anxious about joblessness.
The House passed a $154 billion jobs bill late last year, including elements similar to those in the Senate bill. Mr. Reid plans to unveil a series of additional job-creation measures in coming months.
Write to Naftali Bendavid at naftali.bendavid@wsj.com