CHICAGO—When it comes to pork rinds, U.S. producers have long had the most skin in the game. They produce more of the crispy pigskin snacks than anyone in the world.
Now a new federal rule that will loosen import regulations for pork rinds is roiling the industry. The Department of Agriculture, responding to an Ohio company’s request, has opened the door to imports of the pig skins used for pork rinds from Brazil and other nations. That has stirred an uproar among rivals and many state agriculture officials, who warn that importing pork rinds from areas of the world afflicted with livestock diseases is a threat to food safety. 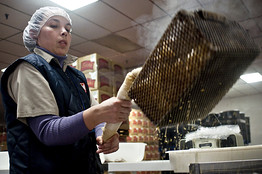 “How essential is it that we start importing pork rinds from countries that have really bad diseases?” asked Dave Griswold, a veterinarian at the Bureau of Animal Health in the Pennsylvania Department of Agriculture.
The federal agriculture department says its new rules would actually help prevent the spread of such diseases by requiring careful documentation from countries that harbor them and mandating that manufacturers cook the products to temperatures high enough to inactivate pathogens.
Byproducts from the pork-rind manufacturing process, including pork-rind scraps and pork fat, are often rendered and fed to hogs as feed.
In 2001, an outbreak of foot-and-mouth disease in the U.K.—believed to have been introduced by imported meat fed to hogs—resulted in the slaughtering of more than four million animals, and losses to the food and agriculture industry of more than $5 billion, according to a report by the U.S. Government Accountability Office.
The U.S. has been particularly sensitive to the problem of animal diseases since 2003, when officials discovered the nation’s first known case of mad-cow disease.
Pork rinds are pieces of pig skin that are typically fried in pork fat and salted or spiced. They are a popular snack in the South and along the U.S.-Mexico border, where they are often called chicharrones.
In the U.S., pork rinds’ popularity peaked when the Atkins low-carbohydrate diet was popular in the early 2000s. Pork rinds contain zero carbohydrates and are packed with protein. Former President George H.W. Bush is a fan, and Men’s Health Magazine has endorsed them as a “junk food that’s good for you.”
After the diet fad calmed, sales dropped, but have since bounced back. Last year, despite the recession, the pork-rind business grew nearly 5%, according to the Snack Food Association, based in Arlington, Va.
The USDA’s action was prompted by a request from Rudolph Foods Co. of Lima, Ohio, for permission to import cooked pork skins from Brazil, an area of the world that harbors foot-and-mouth disease. The company owns a pork-rind factory in Chapeco, Brazil.
Rudolph Vice President Mark Singleton said the new rule was “science-based,” and the company would only ship product from Brazil once the plant is certified as safe by the USDA. He said the company’s main focus is expanding the market in Latin America, but getting the new rule in the U.S. means Rudolph has the option of shipping cooked skins from Brazil in the event of a product shortage in the U.S.
Evans Food Inc., a big Chicago-based Rudolph competitor, opposed the change. “It’s a concern for everybody in the industry,” said Alejandro Silva, chief executive at Evans, as he strolled through his pork-skin plant in Chicago, munching on a bag of the freshly made snack that was still crackling with hot pork fat. “It just takes one pig” that is infected to spread a disease, added Arturo Gutierrez de Velasco, director of food safety at Evans. “The risk is low, but the consequences are really high.”
At the Evans factory near the old stockyards just south of Chicago’s Loop, workers unloaded huge cardboard boxes recently, each filled with 1,800 pounds of frozen hog skin. The skins are mechanically chopped into little squares and cooked until hardened into “pellets.” The pellets—the product Rudolph would likely import from Brazil—are then packaged and sent to processing facilities across the U.S. that deep-fry, or pop, them into pork rinds.
The USDA rule means that now officials with the U.S. Customs and Border Protection are tasked with more closely monitoring the flow of pork rinds.
Even before the new rule was adopted, visitors to the U.S. from Mexico frequently showed up at border crossings with pork rinds and were allowed to carry them into the country once they passed the so-called crispness test. If the pork rind crumbled easily in the hand, that indicated the item was properly cooked; if not, it was likely denied entry to the U.S.
Now, border agents must ensure that pork rinds are accompanied by an “original health certificate” that says the skins were properly cooked, which also now applies to commercial shipments. Certain Mexican states that are free from exotic animal diseases are exempt from the requirement.
Write to Lauren Etter at lauren.etter@wsj.com