AP/Getty images
A labourer works at a steel plant in Huaibei in eastern China’s Anhui province.
U.S. steelmakers won a case over Chinese steel imports, as the U.S. International Trade Commission voted that the domestic industry has been damaged by subsidized steel from China.
The ruling Wednesday will result in duties of between 10% and 16% on future imports of Chinese steel pipes used to extract natural gas and oil. It is the latest in a string of trade decisions against China, the U.S.’s largest trading partner, and threatens to further aggravate trade tensions between the two nations.
On Tuesday, the U.S. imposed preliminary antidumping duties on imports of steel-grate products from China, prompting strong reaction from the Chinese, who said it sent a “wrong, protectionist signal.” Earlier this year, the Obama administration imposed tariffs of 35% on consumer tires from China, which was answered by a Chinese probe into whether U.S.-made autos were being dumped in China at unfairly low prices.

4:12The U.S. International Trade Commission rules unanimously against Chinese steelmakers, in the latest blow in an ongoing trade war between the two countries. WSJ’s Clare Ansberry and Laura Western discuss the impact of the ruling.

The steel-pipe case is the ITC’s biggest ever by dollar amount, and comes as the world’s recession and overall drop in demand for steel products has left steelmakers competing for a smaller pool of customers.
All six commissioners ruled that imports of so-called oil country tubular goods from China, totaling $2.8 billion in 2008, injured U.S. manufacturers. The commission is made up of three Democrats and three Republicans, five of whom were appointed by the Bush administration and one by the Clinton administration.
An official in the news department of China’s Ministry of Commerce said that China “resolutely opposes” the ruling, adding that the ministry will elaborate in a full statement Thursday.
The Chinese government can appeal the decision to the World Trade Organization, and Chinese steelmakers can appeal to a federal district court in New York that handles trade cases. Daniel Porter, a Washington attorney representing the Chinese exporters, said a decision on whether to appeal could be made in several weeks, once a detailed ruling by the ITC explaining the rationale for its decision is made public.
“We are obviously disappointed,” Mr. Porter said. Chinese steelmakers argued that the U.S. industry is trying to stymie legitimate competition and wasn’t injured by the imports. They note the U.S. steel industry was making record profits, especially in 2008, when selling pipe and tube to energy and exploration countries, and argued that Chinese imports increased to meet demand in the U.S.
While prices did eventually fall and inventories grew in the U.S., China’s steelmakers said the same thing happened around the world as a result of the weakening world economy.
But U.S. steelmakers, along with the United Steelworkers, said China tripled its imports into the U.S. — a big consumer of tubular steel — causing a 50% drop in prices, swelling inventories and causing the layoffs of 3,000 workers.
U.S. Steel Corp. said it was pleased with the ITC’s ruling Wednesday. “This enormous surge of unfairly traded goods resulted in an overhang of inventory that crippled the domestic industry,” the company said.
Pittsburgh-based U.S. Steel and seven other domestic producers, along with the United Steelworkers, filed a trade complaint in April against Chinese producers and exporters, claiming China’s government was subsidizing pipe-production costs. Last month, the U.S. Commerce Department imposed countervailing duties on the steel pipes ranging from 10.4% to 15.8%. The ITC’s decision Wednesday allows the government to finalize those duties.


Associated PressA worker at a steel-product market this month in Shenyang, China. The U.S. has imposed duties and tariffs on many Chinese products. 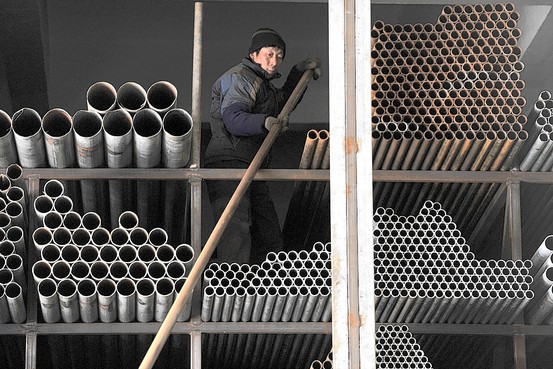 The Commerce Department and ITC also will make separate decisions in coming months on whether to impose antidumping duties on Chinese steelmakers, if it is determined that the pipe products were dumped onto the U.S. market at prices below the cost of production.
The U.S. steel industry, backed by organized labor, is known for filing trade cases against competitors involving several different types of products from wire hangers to steel grates.
The energy market — the key end market for steel pipe — is critical to steelmakers because it tends to be more resilient in downturns compared to auto and appliance markets, which are hurt when labor and job markets are weak and consumers cut back spending. Drillers use so-called tubular goods to line wells and carry oil and natural gas from wells to consumers.
The decision has far-reaching implications, giving domestic producers better pricing power and more incentive to invest in production. They aren’t expected to resume production or hire laid-off steelworkers until inventory levels fall.
Chinese steelmakers are in a bind because they have excess capacity and can’t automatically funnel it to Europe, because the European Union and steel producers there have beefed up trade actions against China as well.
Buyers are also affected both near and long term. Prices are expected to rise and some are already looking for alternative suppliers.
“By shutting off this Chinese steel, it’s going to put a tremendous amount of pressure on the tubular industry,” said Mike Jordan, CEO of Mike Jordan Co. in Fort Smith, Ark. Mr. Jordan said his company, which sold $250 million of tubular steel in the past three years, is searching for products from other countries, but he added: “There’s not enough quality steel mills in the world to produce the type of steel needed for wells being drilled in the U.S.” He predicted domestic steel producers will raise steel prices that could eventually be passed on to consumers.
New duties on imported pipe “could tighten up a highly oversupplied market,” said Joe Hill, a vice president of Houston energy investment bank Tudor Pickering Holt. While he expects that it will become more expensive to drill wells, tubular goods are a small percentage of well-drilling costs.

—Robert Guy Matthews and Russell Gold contributed to this article.
Write to Kris Maher at kris.maher@wsj.com and Henry J. Pulizzi at henry.pulizzi@dowjones.com