By RUTH SIMON and JAMES R. HAGERTY
The proportion of U.S. homeowners who owe more on their mortgages than the properties are worth has swelled to about 23%, threatening prospects for a sustained housing recovery.
Nearly 10.7 million households had negative equity in their homes in the third quarter, according to First American CoreLogic, a real-estate information company based in Santa Ana, Calif.
View Interactive 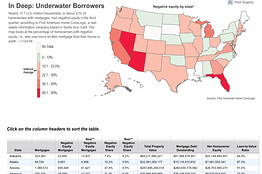 These so-called underwater mortgages pose a roadblock to a housing recovery because the properties are more likely to fall into bank foreclosure and get dumped into an already saturated market. Economists from J.P. Morgan Chase & Co. said Monday they didn’t expect U.S. home prices to hit bottom until early 2011, citing the prospect of oversupply.
Home prices have fallen so far that 5.3 million U.S. households are tied to mortgages that are at least 20% higher than their home’s value, the First American report said. More than 520,000 of these borrowers have received a notice of default, according to First American.
Most U.S. homeowners still have some equity, and nearly 24 million owner-occupied homes don’t have any mortgage, according to the Census Bureau.
But negative equity “is an outstanding risk hanging over the mortgage market,” said Mark Fleming, chief economist of First American Core Logic. “It lowers homeowners’ mobility because they can’t sell, even if they want to move to get a new job.” Borrowers who owe more than 120% of their home’s value, he said, were more likely to default.

Mortgage troubles are not limited to the unemployed. About 588,000 borrowers defaulted on mortgages last year even though they could afford to pay — more than double the number in 2007, according to a study by Experian and consulting firm Oliver Wyman. “The American consumer has had a long-held taboo against walking away from the home, and this crisis seems to be eroding that,” the study said.
Just months after showing signs of leveling off, the housing market has thrown off conflicting signals in recent weeks. Jittery home builders and bad weather led to a 10.6% drop in new home starts in October, and applications for home-purchase mortgages have dropped sharply in recent weeks.
These same falling prices have boosted home sales from the depressed levels of last year. The National Association of Realtors reported Monday that sales of previously occupied homes in October jumped 10.1% from September to a seasonally adjusted annual rate of 6.1 million, the highest since February 2007.
The bump in sales was ahead of forecasts, spurred by falling prices, low mortgage rates and a federal tax credits for buyers. Congress recently expanded and extended the tax credits.
The latest First American data aren’t comparable to previous estimates because the company revised its methodology. First American now accounts for payments made by homeowners that reduce principal, and it no longer assumes that home-equity lines of credit have been completely drawn down.
The changes reduced the total number of borrowers under water — although both old and new methodology show increases from the previous quarter. Using the old methodology, the portion of underwater borrowers would have increased to 33.8% in the third quarter. 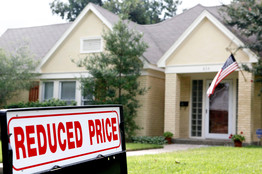 Homeowners in Nevada, Arizona, Florida and California are more likely to be deeply under water, according to the analysis. In Nevada, for example, nearly 30% of borrowers owe 50% or more on their mortgage than their home is worth, said First American.
More than 40% of borrowers who took out a mortgage in 2006 — when home prices peaked — are under water. Prices have dropped so much in some parts of the U.S. that some borrowers who took out loans more than five years ago owe more than their home’s value.
Even recent bargain hunters have been hit: 11% of borrowers who took out mortgages in 2009 already owe more than their home’s value.
Andrew Lunsford put 20% down when he bought his home in Las Vegas for $530,000 in 2004. Now, he said, his home was worth less than $300,000.
“I’m to the point where I feel I will never get my head above water,” said Mr. Lunsford, a retired state trooper who works for an insurance company. He said his bank won’t modify his loan because he can afford his payments, and he’s unwilling to walk away, he said: “We’re too honest.”
Borrowers with negative equity are more likely to default if they live in a state where the bank can’t pursue their assets in court, according to a study by the Federal Reserve Bank of Richmond.
But borrowers who are less than 20% under water are likely to maintain their mortgage if their loan is modified and the payments reduced, said Sanjiv Das, head of Citigroup’s mortgage unit. “Beyond 120%, the most effective modification is a complete loan restructuring, including a principal reduction.”
Mortgage companies have been reluctant to reduce mortgage principal over worries about “moral contagion, with people not paying their mortgage or redefaulting because they believed the bank would reduce their principal,” Mr. Das said.

Many borrowers are so deeply under water that they can’t take advantage of lower rates and refinance their mortgage. “We’re declining hundreds of loans each month,” said Steve Walsh, a mortgage broker in Scottsdale, Ariz. “The only way we will make headway is if we allow for a streamlined refinance where the appraisal is irrelevant.”
Realtors reported that home sales in October were up 24% from a year earlier. The number of homes listed for sale nationwide was 3.57 million at the end of October, down 3.7% from a month earlier, the trade group said. But that inventory could rebound next year as banks acquire more homes through foreclosure.
About 7.5 million households were 30 days or more behind on their mortgage payments or in foreclosure at the end of September, according to the Mortgage Bankers Association. Many of those homes will be lost to foreclosure, adding to the supply of homes for sale.
A recovery could pay off for the roughly 30% of underwater borrowers who owe 110% or less of their home’s value and are able to endure the slump. “Most people prefer to stay in their home” even if the value of their property has declined, said John Burns, a real-estate consultant based in Irvine, Calif.
—Nick Timiraos contributed to this article.
Write to Ruth Simon at ruth.simon@wsj.com and James R. Hagerty at bob.hagerty@wsj.com

Protecting The Integrity of Made in USA Claims