When Sarah B. walks into one of the many stores and restaurants throughout Seattle, she typically scans the décor and takes mental notes about the food and the service. When no one’s looking, she snaps a photo or two with her camera phone.
Sarah B. isn’t a secret shopper, and she’s not spying for the competition. Rather, she is part of a growing force of citizen reviewers who leave their marks — and their opinions — on business review web sites. 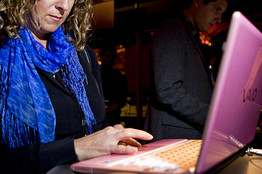 These sites, which include Yelp, CitySearch, UrbanSpoon, Yahoo Local and MenuPages, rely, in part, on voluntary, user-generated reviews of local companies. And they are becoming increasingly influential among consumers.
Of course, some of these sites have been around for years – and restaurant and business reviews have long been popular in print. But now, consumers are doing more of their shopping research online. (Four in 10 consumers now perform online research to aid in offline purchase decisions, according to a recent study from media researcher comScore.) And although they’re sifting through a lot of information, including business hours, store locations and sales, many base their decisions on what their peers have to say.
Sarah B. has been a reviewer for Yelp since December 2005. She has written more than 630 business reviews for the site, landing her Yelp’s “elite” status, a designation bestowed by Yelp on its most prolific and dedicated members. The label has helped her cultivate a following of her own. “I have about 50 fans and people follow my reviews,” says Sarah B., who refused to provide her last name for safety reasons. “Some owners have quoted my reviews and posted them in their stores.”
Of course, Sarah B.’s reviews don’t have nearly the audience of, say, food critic Frank Bruni’s reviews in The New York Times or pieces written by tastemakers on the cooking and dining web site Chowhound. However, they can help put a burgeoning small business on the map.
Just ask Bill DeGroot, the general manager of Metro Brasserie, a French bistro in Scottsdale, Ariz., which opened its doors just 10 days after the market collapsed last year. “After the initial new restaurant buzz wore off, we hit a lull,” he says. To help the bistro rebound, DeGroot offered to host a Yelp function that the site then publicized to its members. “An elite reviewer gave us a glowing review and we got busy again from Yelpers,” says DeGroot. “It is a very powerful medium.”
It’s also growing. Yelp drew nearly 29 million unique visitors in September — besting its closest competitor, CitySearch, by three million visitors, according to web analytics company Compete.
Other sites are catching on, too. New York magazine’s nymag.com and Rotten Tomatoes once relied only on professional reviewers but have opened their forums to the public. And although most review sites started out with an urban focus, many of them have since branched out to rural areas in the U.S. and beyond.
“We are not just urban at this point,” says Ethan Lowry, a co-founder of UrbanSpoon in Seattle. “Now we cover everywhere in the U.S and Canada, as well as parts of the U.K.,” he says.
So what does a fleet of local critics ready to pounce mean for businesses?
The short answer is a lot more handshaking. Providing quality customer service, pumping out the best products possible and playing nice with customers has always been critical to success. But these days, connecting with critics is downright vital, says Chris Brogan, the president of New Marketing Labs, a new media marketing agency in Boston. “The strategy is to get on the same side of the fence as the critic,” he says. “Small businesses should do what they can to meet the critics, hear their concerns [and] communicate any potential updates to their product or service that might improve the critic’s opinion.”
Jack Valko, a co-owner of Knee High Stocking Co., a speakeasy in Seattle, has taken a proactive approach. Since his company’s March launch, Valko has reached out to reviewers on Yelp, BlackBook and Go Time, a regional review site in the Northwest. “We take that feedback very seriously,” says Valko. “If someone gives us a bad review, we always contact them privately and personally apologize for their lousy time,” he says. “In a couple of cases, people came back and changed their reviews.”
A stellar review is ideal. However, detailed criticism has unique benefits, Valko says. “I see these sites [and reviewers] as providing a free type of market research,” he says. “They are in a unique position to tell us not only how we’re doing, but also how we can improve the business.”
Write to Diana Ransom at dransom@smartmoney.com