By MIRIAM JORDAN
A coveted visa program that feeds skilled workers to top-tier U.S. technology companies and universities is on track to leave thousands of spots unfilled for the first time since 2003, a sign of how the weak economy has eroded employment even among highly trained professionals.
The program, known as H-1B, has been a mainstay of Silicon Valley and Wall Street, where many companies have come to depend on securing visas for computer programmers from India or engineers from China. Last year, even as the recession began to bite, employers snapped up the 65,000 visas available in just one day. This year, however, as of Sept. 25 — nearly six months after the U.S. government began accepting applications — only 46,700 petitions had been filed. 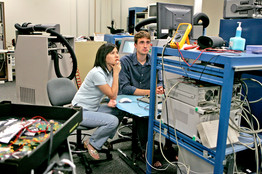 Zuma PressEngineers Anna Li, left, and Jason Schlosser look over data in a lab in San Diego. Ms. Li is from Singapore and has been in the U.S. for five years on an H1-B visa.

In addition to the weak economy, companies have curbed applications in the face of anti-immigrant sentiment in Washington and rising costs associated with hiring foreign-born workers.
Usually, all visas are allocated within a month or two from April, when applications for the following fiscal year are first accepted. But this year, six months later, “you can still walk in with an application and you’re still highly likely to get approved,” said R. Srikrishna, senior vice president for business operations in North America for HCL Technologies Ltd., an Indian outsourcing company.
The sagging economy, which has pushed U.S. unemployment to 9.8%, has crimped expansion in the technology sector, traditionally the biggest user of the H-1B program. Julie Pearl, a corporate immigration lawyer in San Francisco, said that at least a third of her clients have cut their hiring of H-1B visa holders in half from a year ago.
“Most companies just aren’t hiring as many people in general,” Ms. Pearl said.
For Indian outsourcing companies, historically the largest recipients of H-1B visas, the economy as well as political pressures have prompted a cutback in applications. The recession has trimmed technology budgets at their U.S. clients; at the same time, Washington has scrutinized hiring from abroad more closely amid high unemployment at home.
Instead of bringing over Indian engineers, HCL has been hiring American employees who otherwise might have been let go by clients switching the work to HCL, Mr. Srikrishna said. Last year, HCL hired more than 1,000 employees from clients and received just 87 H-1B visas, he said.
Political pressures have come to bear among other applicants as well. Companies that receive federal bailout funds must prove they have tried to recruit American workers at prevailing wages and that foreigners aren’t replacing U.S. citizens. That regulation caused Bank of America Corp., among others, to rescind job offers to dozens of foreigners.
In addition, would-be immigrants from India and China are finding new career opportunities at home as those economies grow relatively quickly while the U.S. economy sags and its political climate appears less welcoming.
Vivek Wadhwa, a visiting scholar at the University of California at Berkeley who has studied H-1B visas, said that trend has been compounded by what he sees as rising anti-immigrant sentiment in the U.S. “The best and the brightest who would normally come here are saying, ‘Why do we need to go to a country where we are not welcome, where our quality of life would be less, and we would be at the bottom of the social ladder?'” Mr. Wadhwa said.
The cost and bureaucracy of applying for H-1B visas is another deterrent. Lawyers’ fees, filing fees and other expenses can easily reach $5,000 per applicant.

And immigration lawyers say some would-be employers are put off by a crackdown on fraud. U.S. Citizenship and Immigration Services, which administers the H-1B program, has been dispatching inspectors on surprise company visits to verify that H-1B employees are performing the jobs on the terms specified. The fraud-detection unit in coming months is expected to inspect up to 20,000 companies with H-1Bs and other temporary worker visas.
“It’s an invasive procedure that is both stressful for the employer and the foreign national employee,” said Milwaukee lawyer Jerome Grzeca, whose employment-visa business is down 40% since last year.
The numbers represent a sharp turnaround for a program that many companies had complained was too stingy with its visas. Year after year, U.S. businesses braced for “visa roulette,” as applications to bring in highly skilled foreign workers far outstripped demand, forcing the government to hold a lottery to award them.
High-tech companies, such as Microsoft Corp., have been lobbying Congress for years to raise the cap. At the same time, some U.S. legislators have been calling for restrictions on the program, which they say displaces American workers.
Sen. Charles Grassley, an Iowa Republican, wrote a letter this month to the new director of citizenship and immigration services, urging tighter controls on H-1B visas. In April, Mr. Grassley and Illinois Democrat Sen. Richard Durbin introduced legislation to require companies to pass more stringent labor-market tests that would ensure they make a bigger effort to hire U.S. workers.
Companies that use H-1B visas argue the market, rather than Congress, should dictate the number of visas issued. The fact that the 65,000-visa cap hasn’t been reached this year shows that the market will temper demand when necessary, said Jenifer Verdery, director of work-force policy at Intel Corp., who represents a coalition of companies that use the visas.
“Contrary to the claims of H-1B critics, if importing cheap labor were the goal of H-1B visa employers, these visas would have been gone on the first day applications were accepted last spring,” Ms. Verdery said. “In slow economic times, such as today, the demand decreases and the market takes over, which is as it should be.”
In 2008, 44% of approved H-1B visa petitions were for foreigners working as systems analysts or programmers. The second-largest category consisted of professionals working in universities. Indians account for about half of all H-1B visa holders.
While the number of visa holders is small compared with the U.S. work force, their contribution is huge, employers say. For example, last year 35% of Microsoft’s patent applications in the U.S. came from new inventions by visa and green-card holders, according to company general counsel Brad Smith.
Google Inc. also says that the H-1B program allowed it to tap top talent that was crucial to its development. India native Krishna Bharat, for example, joined the firm in 1999 through the H-1B program, and went on to earn several patents while at Google. He was credited by the company as being the key developer of its Google News service. Today, he holds the title of distinguished research scientist.
—Niraj Sheth, Geoffrey A. Fowler, S. Mitra Kalita and Pui-Wing Tam contributed to this article.
Write to Miriam Jordan at miriam.jordan@wsj.com
Printed in The Wall Street Journal, page A35