W. Michael Brown has scaled back hiring plans in his Virginia auto-parts stores. Carl Redman halted an expansion project at his Oregon contracting business. Bill Hammack is preparing layoffs at his road-construction company in Georgia.
The economy remains unsteady 22 months after the recession began, with banks restricting credit and consumers hunkering down. For these small businesses, and many others across the country, there’s an additional dark cloud: uncertainty created by Washington’s bid to reorganize a wide swath of the U.S. economy. 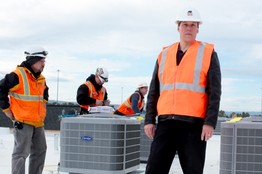 The economic contraction is of course the prime force driving companies to lay off workers. But a health-care overhaul grinding through Congress could bring unknown new obligations to insure employees. Bush-era tax cuts are set to end next year, and their fate is unclear. Legislation aimed at tackling climate change might raise businesses’ energy costs. Meanwhile, a bill aimed at increasing transportation spending is stalled.
Many companies say they have responded by freezing hiring, cutting benefits and delaying expansion plans. With at least 60% of job growth historically coming out of the small-business sector, according to the government’s Small Business Administration, that kind of inertia could impede an economic recovery.
Already, 7.2 million jobs have been lost during the recession, and forecasts show little or no job growth expected for the rest of the year.
Mr. Brown wants to expand Olympus Imported Auto Parts, his 32-year-old business, by adding two stores to his four in northern Virginia. But instead of staffing his new stores with the same number of employees as the older ones — which would mean 40 new jobs — he’s expecting to hire only 15 people. He’ll likely transfer some current workers to new stores.

His business, selling auto parts, has been fine during the recession, he said. “Historically we’ve been a recession-proof industry,” he said, since people are more likely to repair vehicles than buy new ones in tough economic times.
He cut overtime for many of his 150 employees in anticipation of facing fresh health-care costs. He’s worried about getting hit by higher taxes next year, which would cut into income to pay for expansion, raises, bonuses, new product lines and delivery trucks.
Company owners have passionate positions on each of these issues, but mostly they say they want more certainty about future costs.
“There’s so much trepidation out there,” said Mr. Brown. “The thing I’m struggling with is how the potential government takeover of health care coupled with impending taxes will impact my company.”
One likely health-care proposal suggests imposing a per-employee fee on companies that have more than 50 workers and don’t provide coverage. Mr. Brown currently provides Blue Cross coverage for his employees. He pays 75% of the premium for single employees and 50% for family coverage. With a fight expected over the bill that just passed the Senate Finance Committee, it is unclear how he will be affected.
Employment data released this month showed worse-than-expected job losses. According to a National Federation of Independent Business survey, 16% of small business owners said they plan to cut staff or not fill vacancies, a three-percentage-point increase over August. Only 7% said they planned to create new jobs.
The survey concludes that more business owners are planning to contract than expand. In August, businesses were split equally. 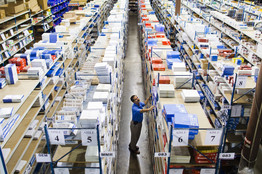 There is little reliable data explaining why companies are retrenching despite signs of life in the economy, including recent increases in production in some industries and rises in housing prices and new home sales. However, a variety of organizations that monitor business behavior, including the NFIB, the Associated General Contractors of America and the National Small Business Association, say political uncertainty is a substantial factor, alongside other more typical problems, such as availability of credit.
“No question, this is a tough issue for a lot of these companies,” said David Wyss, chief economist at ratings firm Standard & Poor’s. “It’s all anecdotal, and it affects everybody differently, but the one common factor is people postpone decisions, and I’m afraid that’s going to slow us down coming out of the recession.”
Mr. Wyss said the resulting lack of hiring is one reason he’s forecasting just 1.5% growth in the economy for 2010. “It’s better than going down but it’s not going to be fun.”
Academic economists have long noted a link between economic growth and the political environment. Fed Chairman Ben Bernanke, in his 1979 Ph.D. thesis, wrote that “increased uncertainty provides an incentive to defer…investments in order to wait for new information.”
Wharton School of Business Professor Raffi Amit cites the Obama administration’s pending overhaul of banking regulations as another drag. He said it will likely require banks to hold more money in reserve, potentially reducing the pool of funds available to make loans.
That combines with uncertainty about other issues, he said. “Obviously people are worried about what health-care costs are going to be. Nobody knows. Taxes, who knows?”
Rep. Mike Coffman (R., Colo.), a member of the House Small Business Committee, said he hears most often from small-business owners about the financial obligations they will face because of taxes and health care. The transportation appropriations bill is another issue, he said.
“I think there is a lot of cash on the sidelines that isn’t going to come until Washington” makes some decisions, he said.
Rep. Nydia Velazquez (D. N.Y.), chairwoman of the House Small Business Committee, said Congress has endeavored to take into account small businesses as it works on health care, climate change and financial regulation. She acknowledged the need for certainty in a recent hearing about the pending expiration of a tax break for first-time homeowners.
“Small firms want to see these matters addressed so they know what the rules are, can make informed decisions and plan for the future,” she said in a written statement. 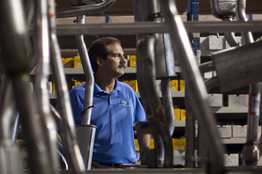 Jim Lo Scalzo for The Wall Street JournalMr. Brown has cut back on hiring plans and overtime for many employees.

The White House referred calls to the Small Business Administration. SBA spokesman Jonathan Swain said officials there “haven’t heard the specific concern” over uncertainty out of Washington. “Of course, we do know it’s not been an easy year for small business.” He said the agency has been working to help small businesses, which are key to the economic recovery, since they employ more than half of the workers in the U.S. Last week, the Obama administration said it would try to shift its bailout funds towards local banks that would in turn provide financing for small businesses.
Small businesses are generally defined as companies with fewer than 500 employees. However, the designation varies in different sectors and industries, with the number of employees and revenue factored in.
Mr. Redman, vice president of Bear Electric Inc. of Donald, Ore., said he’d rather be expanding his operation during a recession, with prices for things such as land, equipment and construction likely more affordable. He’s also thought about adding to his 90-person staff.
“We’d love to step out on the limb and hire more people just to get more folks working, but things are so frightening, and number one on that list is health care,” he said. “Second is taxes.”
In past downturns, Mr. Redman said, he tried to expand his electrical-contracting business. This time, his company had plans drawn up by a local architect for a 10,000-square-foot addition to the warehouse where it maintains its inventory. Having more inventory on hand means he could handle more jobs quickly without waiting for supplies to come in.
The design had been approved by the city. A contract and construction were next.
“We pulled the plug,” he said. “I made the decision based on all the unknowns. I didn’t think it would be wise to make the expenditure because I don’t know if I will need the money to pay for something else.”
Mr. Redman also shelved trying to use the federal “cash for clunkers” program to buy new vehicles, in part because the health-care debate was at full boil. “In a recession, you want to spend cash to get out of the recession. But with this sword hanging over my head, I’m afraid to use my resources to buy more equipment or hire more people.”
Often lost in the furor over health care is a transportation-appropriations law that was set to expire last month, leaving in limbo a six-year, $450 billion spending plan for highway construction, mass transit and other projects, as well as an additional $50 billion for high-speed rail. At the last minute, Congress extended the bill for one more month.
But without a reauthorization bill to replace the existing law, transportation funding remains at current levels for an indefinite period. That has made states and companies reluctant to start new, long-term projects until they know how much the future funding will be.
Mr. Hammack, president of C.W. Matthews Contracting Co., one of the largest road-construction companies in Georgia, said the ripple effect of the delay has already reached firms like his. His company had already laid off 700 of its 2,000 employees since 2007 because of the recession.
Now the delay in passage of the transportation-bill reauthorization and the dearth of state contracts means he’s planning to lay off as many as 200 more employees by the end of the year.
“You can’t proceed under business as normal when there’s no clear direction out there,” he said. “It’s too dangerous to bet on the future and put your company in financial jeopardy.”

He said the Obama administration’s $787 billion stimulus package, while a positive shot, hasn’t provided long-term help for heavy-construction companies such as his. “The stimulus package, at least as it relates to Georgia, isn’t putting the heavy equipment to work that moves dirt,” he said. “It’s been asphalt work. It’s not a sustainable cure for what ails the transportation industry.”
Paul Campbell, executive vice president of Wheeler Machinery Co., a Caterpillar dealer in Salt Lake City, said Utah’s contract work has ground to a standstill as well. “There’s a trickledown when you mess with infrastructure,” he said. “It has a freezing effect on everything.” At his firm, this has meant 221 layoffs. He is considering more among the 629 employees left.
“There’s very little private money going into any kind of construction,” Mr. Campbell said. “You take the federal contracts out of that and it gets a whole lot worse really quick.”
Sandy Abalos, of Abalos & Associates PLLC in Phoenix, is cutting benefits at her certified public accountant firm. She still pays 100% of health-care coverage for her 16 employees, but stopped making 401k contributions. She also stopped profit-sharing, a recent step to hold some cash in reserve in case health-care costs and taxes rise. She is trying to maintain staffing levels and leave salaries alone.
“These are people who have worked with me for 15 years. They’re like family,” she said. “I’ve told everybody there will not be bonuses, so they can plan their own financial life. Everybody has had to pull back.”
Write to Gary Fields at gary.fields@wsj.com