By MAX COLCHESTER And CHRISTINA PASSARIELLO
PARIS—France’s specialized embroiderers, seamstresses, tailors and hatmakers—once the backbone of a thriving fashion business—are today among the hardest-hit victims of the global slowdown in luxury-goods sales. As fashion houses cancel orders and cut costs, these small businesses are now turning to the French government for help.
On Monday, France’s Prime Minister Francois Fillon is scheduled to host a meeting of government advisers, luxury-goods executives and artisans to discuss aid for the country’s craftsmen. Among the dilemmas to be discussed are the fragility of the sector and its importance to France’s image, and the difficulty in recruiting and training young artisans, according to a government official.
Tax breaks and new rules on labeling—in particular to highlight the origin or artisanal nature of a product—are being considered though they may not be announced right away, according to government officials. 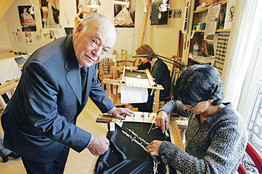 ReutersFrancois Lesage, creative director of a French embroidery specialist bought by Chanel, says he has been outsourcing more ready-to-wear orders. 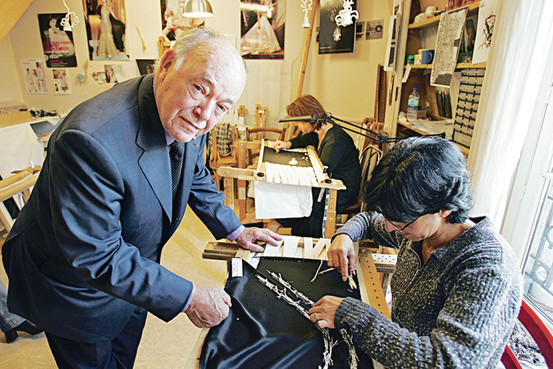 The number of small French businesses serving the high-end fashion industry has shrunk to 115 in 2007 from 468 in 2000, according to the French national statistics agency INSEE. As a result, the number of highly skilled artisans employed in France has dropped 80%, to 5,209 in 2007.
“In the long-term, France’s position as a leader of fashion and creativity is at risk,” says Clarisse Reille, a luxury-goods consultant hired by France’s Industry Ministry to help draw up an aid package for France’s textile businesses.
Orders for luxury garments are down some 30% this year in France from 2008, as consumers cut spending, says Ms. Reille.
France’s world-famous fashion industry has for decades relied on “petites mains,” the artisans who hand craft gowns, shoes and hats. But their influence has been steadily declining.
The advent of “ready-to-wear” clothing some 40 years ago began chipping away at the importance of skilled artisans as fashion houses started making their clothes in large-scale and more cost-efficient factories.
Recently, however, some high-end fashion brands have outsourced even their more complex production abroad. With cheaper labor abroad, many of France’s artisans have been faced with a difficult choice: go out of business or start outsourcing themselves.
Cecile Henri Atelier, a Paris-based embroidery company that works for designer names such as Christian Dior, Chanel and Azzaro, has set up its own workshop in Morocco. The company sends some ready-to-wear lines, such as embroidered dresses and skirts, for production in Marrakech, where it costs a third of the price to embroider a garment than in Paris. All the initial designs are done in Paris.
Sebastien Barilleau, director of Cecile Henri Atelier, says that since he began outsourcing six years ago his sales have doubled. “Most embroiders need to outsource if they are to survive,” Mr. Barilleau says.
In an attempt to preserve technical know-how and guarantee quality, some fashion houses have sought to buy up the artisans themselves. Over the past 15 years, Chanel has bought out several Paris-based artisans who make garments for “haute-couture,” the highest-end of the designer clothes spectrum. Chanel bought Lesage, one of France’s most prestigious embroiderers and six other businesses, including feather specialists and jewelers—without which Chanel couldn’t make its most elaborate clothes. “This is not an act of charity,” says Bruno Pavlovsky, the president of fashion at Chanel.
The companies Chanel bought are allowed to do business with other high-end fashion brands, even though Chanel requires that its own products are all sourced in France.
Francois Lesage, creative director of Lesage, says that while all his designs are created in Paris, he has been outsourcing about 15% of the ready-to-wear orders the company gets to Madras, India, since the late 1990s. “Does the master chef peel the vegetables?” asks the 80-year-old Mr. Lesage.
Another small company, Marty SA has supplied hand-stitched shirts and dresses to Yves Saint Laurent, Chanel and other illustrious French fashion houses for half a century. But faced with a squeeze in orders and pressure to cut costs, owner Emmanuelle Marty says she’s considering moving her production elsewhere as well.
“When I see everyone else doing it, I can’t help but think about it,” she says.
Write to Max Colchester at max.colchester@wsj.com and Christina Passariello at christina.passariello@wsj.com