Entrepreneurs Hire Consultants to Promote Business on Social-Media Sites, but the Extra Cost Is Big Question

Sylvester Chisom began paying a consultant last summer to blog on Twitter, post status updates on Facebook and run marketing campaigns on both sites for his auto-detailing business. 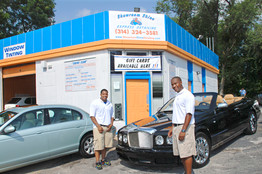 David BucknerSylvester Chisom, front, and Arthur Shivers pay a consultant to market their auto-detailing business on Facebook and Twitter.

He thinks the service, which costs $450 a month, is worth it. “It’s just better having somebody else dedicated to thinking of stuff to put up,” says Mr. Chisom, co-owner of Showroom Shine Express Detailing LLC in St. Louis.
Some small-business owners, overwhelmed by the time commitment required of marketing their products and services via social media, are hiring consultants to lend a hand. But the price of such support can vary widely based on the extent of work involved, and many entrepreneurs with already meager resources for marketing and advertising may be need to think carefully before taking on the extra cost.
The start-up 3 Green Angels, for example, charges clients a $400 fee to organize Twitter parties — real-time discussions on specific topics. Everywhere LLC, another specialty firm in Atlanta, charges clients up to $20,000 to arrange three streaming video press conferences led by popular bloggers.
Other agencies simply tack on social-media support as part of a package of advertising and public-relations services. Red Square Agency Inc., in Mobile, Ala., charges clients around $200 an hour, and ThinkInk LLC charges $10,000 to $20,000 a month for the integrated services.
Showroom Shine’s Mr. Chisom says he’s received several inquiries from potential customers who said they learned about his company through a recent promotion on Facebook. Revenue and traffic to his company’s Web site are up slightly from this time last month, he adds.
But Jonathan Zadok, co-owner of the Coffee Groundz LLC in Houston, says he wouldn’t pay another firm to blog on behalf of the four-year-old café. 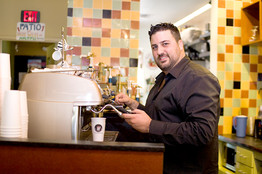 Imelda BettingerThe Coffee Groundz prefers to use its general manager, J.R. Cohen, to promote the café.

“The idea with Twitter is that you get close to an immediate response,” he says. With an in-house person handling it, “there’s no middle man that has to go check with the company,” he says.
Mr. Zadok says last fall Coffee Groundz’s general manager, J.R. Cohen, set up profiles for the café on Twitter and Facebook. Customers started tweeting orders and special requests such as booth reservations, and in-store events promoted on the sites drew crowds three times as large as those previously advertised through signs and other traditional means.
Mr. Cohen, 31 years old, says he simultaneously posts blog entries on Twitter, Facebook and his employer’s Web site three times a day, often from his BlackBerry. He receives text-message and email alerts whenever messages are posted to Coffee Groundz’s feed so he can respond, if necessary, in a timely manner.
Mr. Cohen taught himself how to use Twitter and Facebook in about a month despite being someone who’s “not tech savvy at all,” he says. He estimates he devotes no more than 30 minutes a day to managing his employer’s presence on social media. “That’s really all you need,” he says.
Larry Chiagouris, professor of marketing at Lubin School of Business at Pace University, says it makes sense for some companies to pay for help to quickly learn social-media basics. But to use sites like Twitter and Facebook effectively, he says small firms typically need to be in control to show they are legitimate and sincere. “Unless a third party lives with you a long time, they can’t do that very well,” he says.
Some small-business owners say they are paying only for training and will eventually take full responsibility for managing their companies’ day-to-day presence on social media. Still, others say they need continuous support for handling certain tasks and promotions because they lack the necessary manpower and expertise.
Back of the House USA LLC, a St. Petersburg, Fla., provider of back-office support to solo entrepreneurs, falls into the latter category. Founder Erik Vonk says he and the firm’s 12 employees are getting “technical guidance” in using social media from consultants at Everywhere. But he adds that any opinions expressed on the sites “are ours.”
Back of the House has been paying Everywhere a monthly retainer since the spring and expects the social-media training to wrap up late next month. Afterward, Everywhere’s consultants will continue to help the firm take advantage of social media by organizing special promotions, monitoring what’s being said about the company and more.
The service is costing Back of the House between $5,000 and $15,000 a month (Mr. Vonk declined to be more specific).
So far Mr. Vonk says the investment is paying off. “I’m learning enormous amounts about how social media work, where to find the right software, how to search, what lingo to use, etc.,” he says.
Write to Sarah E. Needleman at sarah.needleman@wsj.com