By JOSH MITCHELL and STEPHEN POWER

WASHINGTON — A tiny car company backed by former Vice President Al Gore has just gotten a $529 million U.S. government loan to help build a hybrid sports car in Finland that will sell for about $89,000.
The award this week to California startup Fisker Automotive Inc. follows a $465 million government loan to Tesla Motors Inc., purveyors of a $109,000 British-built electric Roadster. Tesla is a California startup focusing on all-electric vehicles, with a number of celebrity endorsements that is backed by investors that have contributed to Democratic campaigns. 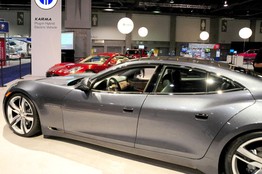 The awards to Fisker and Tesla have prompted concern from companies that have had their bids for loans rejected, and criticism from groups that question why vehicles aimed at the wealthiest customers are getting loans subsidized by taxpayers.
“This is not for average Americans,” said Leslie Paige, a spokeswoman for Citizens Against Government Waste, an anti-tax group in Washington. “This is for people to put something in their driveway that is a conversation piece. It’s status symbol thing.”
DOE officials spent months working with Fisker on its application, touring its Irvine, Calif., and Pontiac, Mich., facilities and test-driving prototypes.
Matt Rogers, who oversees the department’s loan programs as a senior adviser to Energy Secretary Steven Chu, said Fisker was awarded the loan after a “detailed technical review” that concluded the company could eventually deliver a highly fuel-efficient hybrid car to a mass audience. Fisker said most of its DOE loan will be used to finance U.S. production of a $40,000 family sedan that has yet to be designed.
“It’s the ability to drive significant change in fuel economy across a large market segment” that swayed the department to approve the Fisker loan, Mr. Rogers said. “We got quite excited.”
Henrik Fisker, who designed cars for BMW, Aston Martin and Tesla before starting his Fisker Automotive in 2007, said his goal is to build the first plug-in electric hybrids that won’t sacrifice the luxury, performance and looks of traditional gas-powered luxury cars.
The Karma will target an exclusive audience — Gore was one of the first to sign up for one. Mr. Fisker says all new technology starts out being expensive. He pointed to flat-screen televisions that once started at $25,000 but are now affordable to the mass market.
The four-door Karma, powered by a lithium-ion battery, will be able to run solely on electric power for 50 miles, and will achieve an average fuel economy of 100 mpg over the span of a year, the company says. Production is scheduled to start in December, with about 15,000 vehicles a year expected to hit the U.S. market starting next June.
Many of the 1,500 people who have made deposits on the Karma are former BMW and Mercedes owners who want an environmentally friendly car without sacrificing luxury, Mr. Fisker said.
He said he pitched the Karma to Mr. Gore at an event hosted by KPCB last year, and that the former vice president almost immediately submitted a down payment for the car.
Kalee Kreider, a spokeswoman for Mr. Gore, confirmed that the former vice president backs Fisker and purchased a Karma. “He believes that a global shift of the automobile fleet toward electric vehicles, accompanying a shift toward renewable-energy generation, represents an important part of a sensible strategy for solving the climate crisis,” she said in a statement.
Fisker’s top investors include Kleiner Perkins Caufield & Byers, a veteran Silicon Valley venture-capital firm of which Gore is a partner. Employees of KPCB have donated more than $2.2 million to political campaigns, mostly for Democrats, including President Barack Obama and Hillary Clinton, according to the Center for Responsive Politics, a nonpartisan group that tracks campaign contributions.
Officials at Kleiner Perkins didn’t return requests for comment.
Asked whether Mr. Gore had any influence on Fisker’s application, the DOE’s Rogers said, “None at all.”
“This is a very attractive, very across-party-lines kind of vehicle,” Mr. Rogers said. “All of the detailed due diligence [was] done by independent review teams.”
Other Fisker investors include Eco-Drive (Capital) Partners LLC, an investment consortium, and Qatar Investment Authority, a state-run investor based in Qatar.
Fisker’s government loans will come from a $25 billion program established by Congress in 2007 to help auto makers invest in the technology to meet a new congressional mandate to improve fuel efficiency. In June, the DOE awarded the first $8 billion from the program to Ford Motor Co., Nissan Motor Co., and Tesla, which are all developing electric cars.
Some companies that have been turned down for loans from DOE say they did not get much feedback from the department about their applications. O. John Coletti, president of EcoMotors International of Troy, Mich., said his company applied for a $20 million loan from the agency last December, and last month got a one-page rejection letter from the loan program’s director, Lachlan Seward. EcoMotors’ lead investor is Vinod Khosla, himself a former Kleiner Perkins partner and a longtime campaign contributor to Republicans and Democrats alike.
“I don’t have an issue with the winners … it’s possible somebody has better ideas than us,” Mr. Coletti said. At the same time, he said, “More feedback from DOE on a timely basis would be wonderful. When you’re running a business you’d like to know whether you’re going to be able to take advantage of this opportunity.”
Mr. Coletti’s company — which makes diesel engines and is still waiting to hear from the Department on a separate loan application to help it build a manufacturing facility — isn’t without politically well-connected patrons, either. Its major investor is Vinod Khosla, himself a former Kleiner Perkins partner who has donated to campaigns.
Scott Redmond, CEO of XP Vehicles Inc., said he met with DOE officials twice in Washington after applying for a $40 million loan to develop a $15,000 to $25,000 hybrid, and that both times he was told his application looked good. Since receiving a rejection letter from DOE in August, Redmond said, he has been unable to get a full explanation as to why his request was turned down.
Mr. Rogers said he was not at liberty to discuss individual applications that had been turned down, but said the process has been handled fairly and objectively.
Write to Josh Mitchell at joshua.mitchell@dowjones.com and Stephen Power at stephen.power@wsj.com