Debra and Arthur Scriven were served notice in June 2008 that their mortgage lender, a unit of Citigroup Inc., was preparing to foreclose on their home. Fifteen months later, the Scrivens are still in their home near Columbia, S.C., and battling to stay there, even though a dispute with the lender over how much they owe prompted them to stop making regular payments last year. 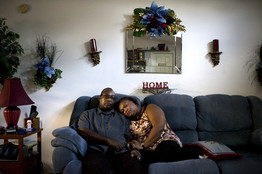 Debra and Arthur Scriven, last week in their home near Columbia, S.C. A hearing on their foreclosure case is scheduled for Wednesday.

Legal snarls, bureaucracy and well-meaning efforts to keep families in their homes are slowing the flow of properties headed toward foreclosure sales, even when borrowers are in deep distress. While that buys time for families to work out their problems, some analysts believe the delays are prolonging the mortgage crisis and creating a growing “shadow” inventory of pent-up supply that will eventually hit the market.
The size of this shadow inventory is a source of concern and debate among real-estate agents and analysts who worry that when the supply is unleashed, it could interrupt the budding housing recovery and ignite a new wave of stress in the housing market.
“There’s going to be a flood [of bank-owned homes] listed for sale at some point,” says John Burns, a real-estate consultant based in Irvine, Calif. When that happens, Mr. Burns believes, home prices will fall further, particularly in markets with large numbers of foreclosures. Overall, he expects home prices to decline 6% next year.
Ivy Zelman, chief executive of Zelman & Associates, a research firm based in Cleveland, believes three million to four million foreclosed homes will be put up for sale in the next few years. The question is whether the flow of these homes onto the market will resemble “a fire hose or a garden hose or a drip,” she says.
Analysts who track the shadow market have focused primarily on the gap between the number of seriously delinquent loans and the number of foreclosed homes for sale by mortgage companies. A loan is considered seriously delinquent, which typically means it is headed to foreclosure, if it is 90 days or more past due.
As of July, mortgage companies hadn’t begun the foreclosure process on 1.2 million loans that were at least 90 days past due, according to estimates prepared for The Wall Street Journal by LPS Applied Analytics, which collects and analyzes mortgage data. An additional 1.5 million seriously delinquent loans were somewhere in the foreclosure process, though the lender hadn’t yet acquired the property. The figures don’t include home-equity loans and other second mortgages
Moreover, there were 217,000 loans in July where the borrower hadn’t made a payment in at least a year but the lender hadn’t begun the foreclosure process. In other words, 17% of home mortgages that are at least 12 months overdue aren’t in foreclosure, up from 8% a year earlier.
Some borrowers may be able to catch up on their payments or receive a loan modification that helps them keep their home. There has also been an increase in short-sales, transactions in which at-risk borrowers sell their homes for less than the loan amount, with the lender’s approval. In some cases, lenders have decided not to foreclose because the home’s value is so low. These factors could mean fewer foreclosures.
Foreclosed homes are partly responsible for the recent increase in home sales. But foreclosures also push down home values. According to Collateral Analytics, a housing research firm, homes that have been foreclosed on typically sell at a 10% to 50% discount.
For now, the delays have led to what is probably a temporary drop in the supply of bank-owned homes in California and other places where investors and first-time home buyers have been competing for bargains. In Orange County, Calif., the number of bank-owned homes listed for sale dropped to 322 in early September from 1,404 in November 2008, according to Altera Real Estate.
But the number of foreclosures is expected to increase in the fourth quarter as mortgage-servicing companies determine who is eligible for a loan modification and who isn’t. “We are going to see a spike from now to the end of the year in foreclosures as we take people out of the running” for a loan modification or other alternatives, says a Bank of America Corp. spokeswoman. Foreclosure sales had dropped to “abnormally low” levels in response to government efforts to stem foreclosures, she adds.
For the Scrivens, legal battles have complicated the process. Ms. Scrivens says Citigroup recently offered to modify their loan, but she and her husband rejected the offer because they objected to some of the conditions. A hearing on the foreclosure case is scheduled for Wednesday in a Kershaw County, S.C., court.
Citing customer privacy, a Citigroup spokesman declined to comment specifically on the Scrivens situation. “Our priority goal is to keep distressed borrowers in their homes and out of foreclosure, when possible,” he said.
Write to Ruth Simon at ruth.simon@wsj.com and James R. Hagerty at bob.hagerty@wsj.com

Made in USA: Growing Panes for a High-Tech Window Company

What Does the Future Hold for American Manufacturing?

How to Save U.S. Manufacturing Jobs