It’s been one year since century-old Lehman Brothers lapsed into bankruptcy and sent the U.S. economy into a tailspin that’s left few businesses unscathed. From the beginning of last September through the end of August, 83,885 businesses filed for bankruptcy protection, according to Automated Access to Court Electronic Records, an Oklahoma City-based bankruptcy data and management company. As for the companies that survived, many have gleaned lessons that are changing the way they do business.
The changes vary in size and scope. Al Subbloie, the founder and chief executive of Tangoe, a telecom expense management software and services firm in Orange, Conn., has tweaked the terms of his customer agreements. Although, this year has been a relative boon for his company, which helps firms control telecom costs, Tangoe is putting a greater emphasis on locking down his customer base. 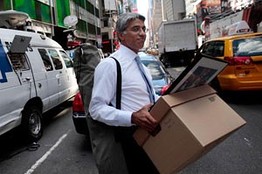 “Some clients have gone bankrupt,” says Subbloie. “You don’t think companies like Lehman and Circuit City are going to go bankrupt when you sign them,” he says. “We’ve needed to be more careful about how we write our contracts.”


Survival strategies like this may be inspired by downturns, but they can often aid businesses during upswings, as well, says David S. Waddell, the CEO of investment strategy firm Waddell & Associates in Memphis, Tenn. Consider a company that maintains lean practices even in good economic times. By controlling expenses, sales can boost profits higher, he says. Moreover, “business owners need to have [protection] strategies in place, should events like this recur,” he says. “The [companies] that have been successful [through this period] have built their businesses to be resilient when contingencies occur.”
Here are five lessons that business owners can take away from the downturn:

As scores of business owners saw their credit lines slashed or their loans called during this downturn, securing alternate funding and credit relationships became their top priority, Waddell says. “Having multiple sources of credit would have insulated them when banks stopped lending,” he says. (For our story on alternative sources of funding, click here.)
Tightening credit and dwindling funds don’t always reflect the borrower. “It could be the supplier’s fault,” Waddell says. To reduce your risk, understand who your suppliers are and how they operate. For instance, if your supplier relies heavily on other, less financially secure suppliers, that could be a red flag. At that point, figure out how dependent you are on them, Waddell says. If a single vendor supports a vital piece of your operation, align a backup, he says.

And although a lack of diversity among customers may entice owners to extend credit to boost sales, be leery about doing so too freely, says Donald F. Kuratko, the executive director of the Johnson Center for Entrepreneurship and Innovation at Indiana University’s Kelley School of Business. “Be more conservative about who you extend credit to,” he says. Then, when you hit a downturn, you’ll have a cash reserve, and you won’t have to spend your time chasing after customers who aren’t able to pay, Kuratko says.

To the extent you can, tailor your products and services to the downturn, says Peter S. Cohan, the president of Peter S. Cohan & Associates, a management consulting firm in Marlborough, Mass. In tough times, clients may have different problems. For instance, when the economy hit the skids, Tangoe played up its cost-cutting services. “We offered more analysis on the costs that we saved clients,” Subbloie says.

Not every company can play the low-cost leader. For instance, luxury-oriented companies and brands might see a sales gain by providing stellar customer service. Switching focus or recognizing expansion opportunities can also boost business. “The key is, you should put a lot of thought into which strategy to exploit ahead of time,” Cohan says. “Have acquisition, partnerships and product expansion ideas already in mind so that you are ready when the cycle changes.”

If you’re going to expand operations, purchase new equipment or hire workers in a downturn, make sure there’s a reasonable amount of profit potential. “We don’t want these companies to say, ‘Now that times are better, I can start spending frivolously again,’” Kuratko says. “The decisions you’re making today should either provide a return today or benefit you going forward.”
But if you’re going to take on added obligations, make sure you can meet them. Those who took on too much debt, signed long contracts or added an assortment of fixed costs when times were good, were kicking themselves when their revenue stream slowed to a trickle, Waddell says. For them, the lesson to avoid taking on more overhead than they can handle is particularly salient. “When revenue plummets, my office gets more and more expensive,” he says, adding: “Do everything you can to keep your costs variable.”
Write to Diana Ransom at dransom@smartmoney.com

Pitching Products to Walmart, in 30 Minutes